Trending Now
You are at:Home»Features»The Last Outpost: Italians Make Final Attempt To Stop A Law That Would Give Rights To Gay Couples

The law, which is to be voted in these days, solely aims to give to same-sex couples basic rights such as: civil partnership, union or separation of property, and possibility to adopt a partner’s biological child ( called stepchild adoption ). 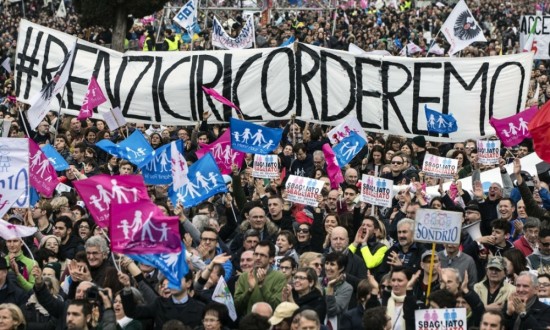 Approximately two million of people gathered in Rome last Saturday to protest against a bill that would grant legal rights to gay couples for the first time in Italian history. In fact, the boot shaped’s nation is the last Western European country that, also because of the great influence of the Vatican on both population and government, doesn’t allow civil unions or marriage for gay couple.

Giuseppe Vacca, a notorious socialist politician in Italy, on whether he believes the protesters were right or not stated, ” They have a point, the problem exists. We cannot pluralize family, which it is one..a child is not a given right. However, we must recognize civil unions for same-sex couples.”

On another hand, Luciana Littizzetto, a famous Italian shock jock wrote that the Family Day ( how the protest was called) is , “Nothing but a day in which priests, prostitute habitués, and divorced/remarried political leaders tell how beautiful the traditional family is.” 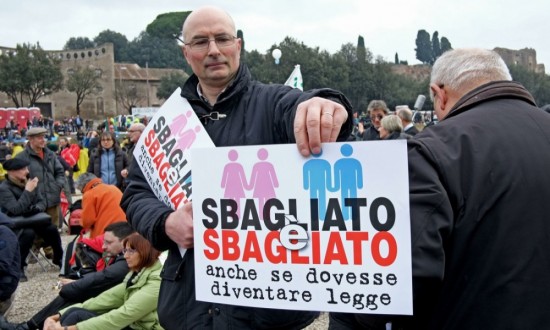 ” Wrong is wrong, even if it will become law” was the most popular slogan among people who attended the event last Saturday in Rome

Italy is equally divided between who wants to protect the traditional family, and who thinks that is time to obey to mother Europe which in 2015 has condemned Italy for not protecting basic rights of gay couples. Many people, from politicians, to entrepreneurs have in a way or in another showed support for the rally occurred in Rome last Saturday.

Train company Italo has offered 30% discount on their tickets for who was attending the Roman event, while Guido Barilla, the head of the pasta company, a while ago stated that he will never show a gay family in one of Barilla’s spots, also claiming that if his consumers don’t like it they can purchase a different type of pasta. Moreover, even worldwide famous gay stylists, Dolce & Gabbana, have stated their opposition to gay adoption a year ago.

The beginning of a process that would lead Italy to approve same-sex marriages, gay adoption, and surrogacy arrangements.

Gandolfini, the person behind the protest stated that, ” It is incredibly uncivilized to program the birth of a orphan. The feminist movement should throw up in front of the idea that is possible to purchase the uterus of a woman.” 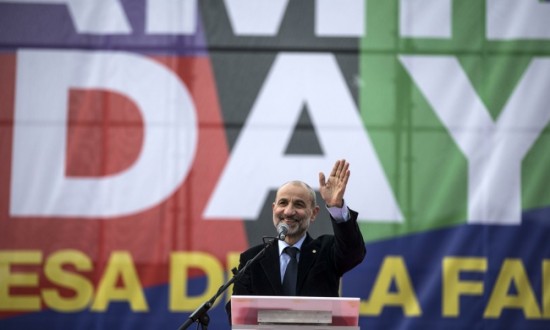 Mr Gandolfini, the person behind the event, speaking in front of two million people

In fact, the main fear of who attended the protest consists in believing that this bill, which solely aims to recognized civil union between same-sex couples and to give the possibility to adopt a partner’s biological child, would be the beginning of a process that would lead Italy to approve same-sex marriages, gay adoption, and surrogacy arrangements, which were called “repugnant’ by Italian minister of intern.

Lastly, on Sunday even the pope, who was believed to be secretly in favor of same-sex unions, indirectly commented the situation by stating that, “There can be no confusion between the family willed by       God and any other type of union.”

The bill is under scrutiny, and in a matter of days the world will know whether Italy is still anchored to its roots or is ready to join the other Western nations toward a common goal. However, analysts are divided into who strongly believes that the law will entirely pass, and who thinks that Mr Renzi will cancel the stepchild adoption’s opportunity in order to, at least, obtain civil unions to pass.