Trending Now
You are at:Home»Features»Arts & Entertainment»The Man, The Myth & The Legend: Denzel Washington

“He only needs to be known by one name: Denzel”

We have all grown up with Denzel in our living room, from St. Elsewhere, to American Gangster, Remember The Titans, and now the Golden Globe Award Winning Film-Fences. Denzel has been following his dream in the arts since the early 1980’s. He has made his presence known on the stage first, then later on the big screen. He was born and raised in Mount Vernon, New York where his mother owned a beauty shop and his father was an ordained minister. He grew up in the Boys and Girls Club and now is a spokesperson for the organization. The leader there was and still is one of the biggest influences he has had, not only through life but also his career.

“The owner of Boys and Girls Club told me when I was ten that I can be whatever I want. That was the day that I realized I could be a firefighter, and I will never forget that. The power that adults have on our children is incredible. As adults we need to never forget how empowering we can be.” Denzel Washington

When his parents divorced, his mother sent him away to military school, which he says “changed his life.” Denzel attended Fordham University in New York. He originally entered college as a Pre-Med major and took one class and changed majors immediately. He talks about the specific class he took and jokes about how he couldn’t even pronounce the name of the first class. Denzel then decided he wanted to be a lawyer. That didn’t work out, but he says…

“Hey it’s alright though because I’ve gotten to play one, and a damn good one too”.- Denzel Washington 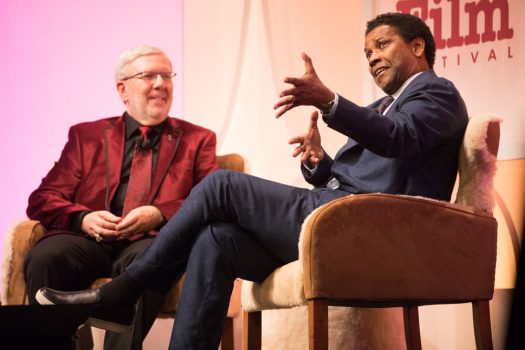 Denzel finished his degree in Journalism and Drama. When asked by Santa Barbara International Film Festival moderator and renowned film critic Leonard Maltin how he got started, Mr. Washington replied…

“I worked as a creative arts director at an overnight YMCA summer camp. As a camp leader, we had to put on a talent show, so after our show one of my fellow camp leaders’ told me I should get into acting. So, after the camp I went back to New York and enrolled at Lincoln Center and began studying acting. Then I studied at the American Conservatory Theater in San Francisco. I was a theater snob, and wanted to jet back to New York as soon as possible. I remember saying to myself that I will never go to Hollywood.” Denzel Washington

Denzel Washington played the lead in a 1975 Fordham production of “The Emperor Jones.

Well, aren’t we glad he did!

Every film that Denzel has been apart of has been powerful. He has contributed much more than just being a ‘good actor’ to the screen.

“Your natural ability will only get you so far”-Denzel Washington

The films that he has been a part of have meant something. Malcolm X, Philadelphia, and Remember The Titans (to just name a few) have not only made an impact, but have raised awareness not only on the black community but also the community as a whole.

Malcolm X: A 1992 film about activist Malcolm X. The film shows events in Malcolm X’s life from his criminal career, his incarceration, his religion, his marriage, his views, and his assassination. Malcolm X’s widow, Dr. Betty Shabazz worked alongside as a consultant for the film. When Denzel Washington took the role for Malcolm X originally in the play When the Chickens Come Home to Roost, he says he knew little about his life. Denzel made it his mission to know him. He read his biography, went over hours of film footage and old speeches along with interviewing people who were close with Malcolm X, himself. Spike Lee, the director of the film said he would never imagine anyone else playing the role besides Mr. Denzel Washington.

Philadelphia: A 1993 film and one of the first films in Hollywood to ever acknowledge HIV/AIDS, homosexuality, and homophobia. Denzel Washington played the ‘damn good lawyer’ he always wanted to be. This film indicated a shift in Hollywood films showing the realistic struggles and depictions of gay and lesbians. Denzel’s role in this film was inspiring. It showed that everyone belongs regardless of color and now, sexual orientation.

Remember The Titans: A 2000 sports film taken place in Alexandria, Virginia in 1971. Denzel Washington played the role of African-American coach Herman Boone. Herman Boone is hired to be head coach at Virginia High School, with strong attempt to soothe rising racial tensions with the fact that all other high schools were ‘whites only’. The entire community was against this ‘mixed racial’ team but it gave Boone more and more motivation to make things right and unify this team. Again, having one of his films demonstrate the power of unity. This role was not only  an important piece of art to show a spotlight on racism in our community,but also highlighted the point of leadership.

What is beautiful about Denzel Washington are the films that he chooses, which shares a strong message with all of us. Through his art he has given heterosexuals, homosexuals, African-Americans, and communities the one thing that we always need:  HOPE.

Denzel is a man of many talents and has proven that, on stage and on screen. When Leonard Maltin asked Denzel where he keeps his awards, Mr. Washington replied…

“The Oscars in my library and uncle Tony is back in New York. I haven’t found a place yet for their new family member, Mr. SAG. [Laughs] I actually just talked to my Oscars this morning. But, what I must say next to my Oscars on the shelf are four frames; and in those frames are degrees from: Morehouse College, New York University, University of Pennsylvania, and Yale University. That shelf holds what I’m most proud of [referring to his four children’s college degrees]”. –Denzel Washington

Denzel has made it. He is a man that is not only changing the film industry, but the world with his compassion, dedication, and heart.