Trending Now
You are at:Home»Lifestyle»Health»Meditating on Death to Commit to Living: Part 1

Death. This is not a typical conversation that comes up casually over drinks with friends, yet maybe it should be. In Western Culture, we tend to shy away from confronting the inevitability of death, and not many people are comfortable acknowledging it as a fact of life. This is very different than Eastern cultures, particularly the ones who practice Buddhism. In fact in Bhutan, the happiest country in Asia and the eighth happiest country in the world, people think about their death about five times every day. Linda Leaming wrote in her book A Field Guide to Happiness: What I Learned in Bhutan About Living, Loving and Waking up, “I realized thinking about death doesn’t depress me. It makes me seize the moment and see things I might not ordinarily see. My best advice: go there. Think the unthinkable, the thing that scares you to think about several times a day.” By accepting and acknowledging it as an inevitable part of life, the Bhutanese cultivate more joy, appreciation, gratitude, happiness, meaning, peace, and clarity into our lives. 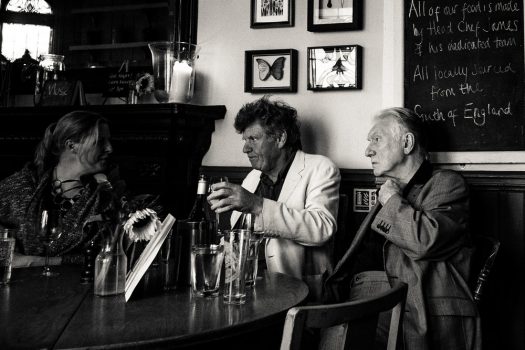 Way too often I have conversed with friends and strangers alike where they are so fixated on something in the past they are completely robbing themselves of truly living their best life. I, in many cases, have been no exception. One example that comes to mind is after ending a toxic relationship I spent most of my time living in a fabricated flashback of my own making where I somehow time-traveled to the past and theatrically recreated experiences I wish had turned out differently. My mind was like a broken record constantly re-visiting my past self in this fantasy where I was able to open my eyes sooner and walk away earlier than I actually did. I felt that since I stayed in the bad relationship for so long I missed out on a lot of positive opportunities; yet ironically enough, these fabricated flashbacks I was creating were doing the exact same thing. I finally got to the point where I didn’t want to waste another precious moment on something trivial that won’t matter in five years. I wanted to be happy, I wanted to live my life to the absolute fullest.

So in an attempt to solve this dilemma and reclaim my present moment, I consulted the wisdom of the world that is available at my fingertips. I recently did a social media detox where I unfollowed any page or profile that I felt brought any negativity into my life. Now whenever I open up Instagram only content that truly inspires me to be my best self shows up. Jade Alectra Leblanc is one of these inspirations because of the raw and powerful messages she writes on her page. Jade is a yoga teacher, fitness enthusiast, and writer, who is an inspiration for thousands. In a suicide attempt, Jade once tried to drive her car off of a cliff, only to have her engine die right as she reached the edge, saving her life. In tears, she noticed her biggest commitment she ever tried to follow through on was death. She realized she could flip the script and be fully committed to living, and through her social media she encourages others to do the same. Turning to her virtual platform as a source for insight, I saw the words “death meditation” for the first time. In fact, Jade’s name was recently mentioned in Oprah’s magazine as one man writes about having a stroke at age 51, and how Jade’s take on a death meditation brought him to tears as he reflects on how precious life really is. 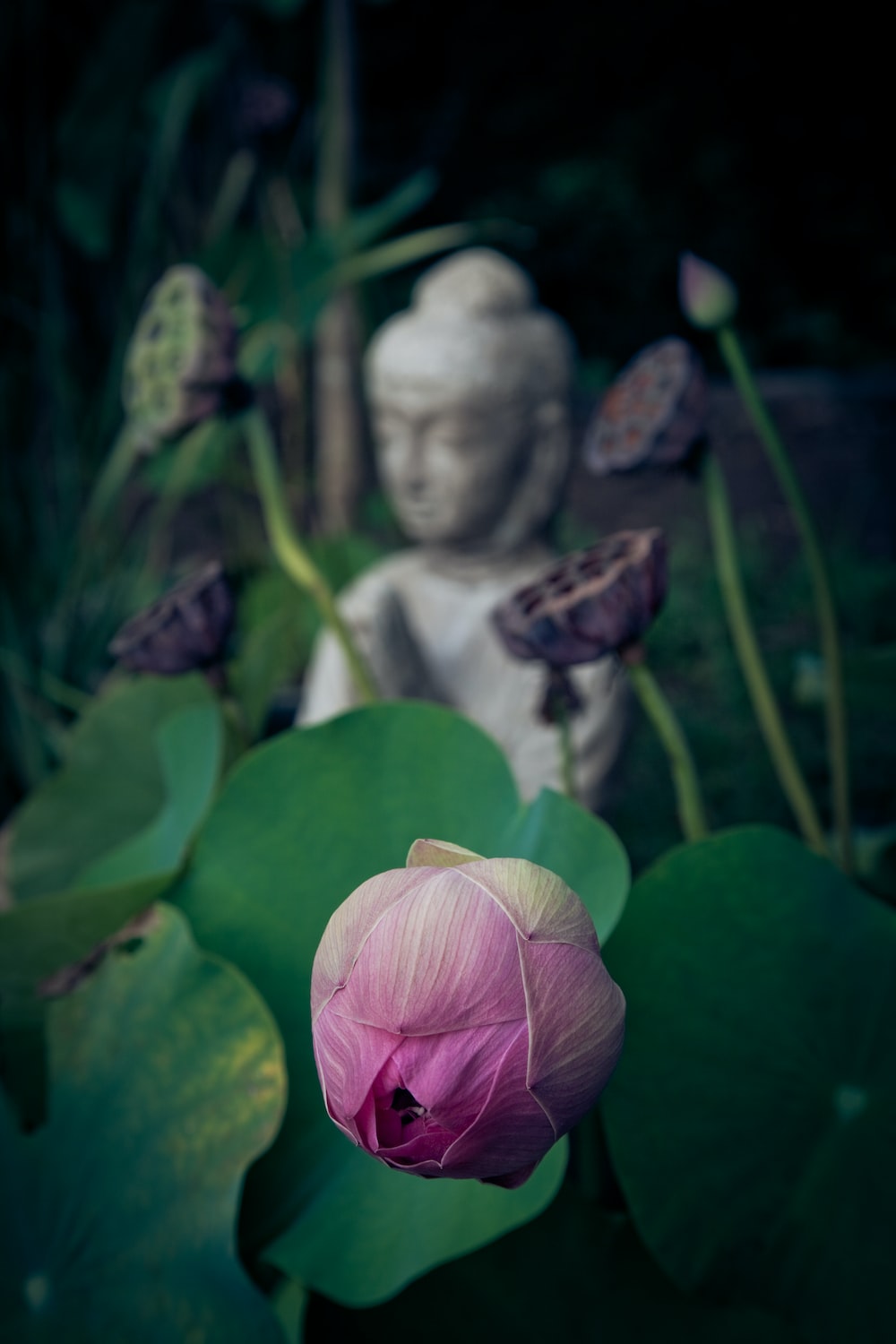 Underneath one of her photos she provided a glimpse of a self-created death meditation script, “Open your eyes and you see a man in front of you. He isn’t smiling, but he is looking directly into your eyes. ‘Your time has come’ he says. ‘This is your last moment on earth.’ What is the first thing you feel? Someone told me the other day everyone lives with regret. What would yours be? If you could sit in the gutters of honesty, and explore what your life was made of, what would you go back and do all over again?” As someone with an interest towards meditation, I was intrigued with the intensity of this particular one. “And then it hits you,” Jade continued, “there were moments in your life that you waited too long to do something you really wanted to. What were they? Are you happy you waited, now that you’ve reached the edge of it all?” Her words served as a well needed piercing revelation, one day we are all going to die, and I had to face if my failed attempts at re-writing my past were really a good way to spend my days.

In his book Advice on Dying, the Dalai Lama wrote: “It is crucial to be mindful of death — to contemplate that you will not remain long in this life. If you are not aware of death, you will fail to take advantage of this special human life that you have already attained. It is meaningful since, based on it, important effects can be accomplished. Analysis of death is not for the sake of becoming fearful but to appreciate this precious lifetime during which you can perform many important practices. Rather than being frightened, you need to reflect that when death comes, you will lose this good opportunity for practice. In this way contemplation of death will bring more energy to your practice.” Although at it’s surface the words death meditation alone may cause some uneasiness, the benefits of it are incredibly positive. Death in this context is not meant to be morbid or unsettling. The purpose here is that life on earth is precious but not eternal, and time spent in gratitude is much more enjoyable than time spent in bitterness.

I was ready to confront myself on how I was approaching life, and I was going to do so by reflecting on death. I found time and space for quiet contemplation, where I asked myself if I was going to die in six months, what would I be doing now? The common saying “why do today what you can put off until tomorrow?” is challenged through reflecting on the impermanence of life by asking “if tomorrow never comes, what would you do today?” With that simple rephrasing I experienced a major shift in perspective. And the results were astounding, needless to say, I finally made peace with my past, extended forgiveness I previously refused to give, and developed such a deep love and appreciation for life that hasn’t left my side since.

It’s so easy to do that you don’t have to travel all the way to Bhutan to reap the benefits of reflecting on your death, but you could if you wanted to! Chair of the Undergraduate Department and Antioch professor Dawn Murray is taking students to Bhutan in December 2019, where those who go can have the opportunity to reflect on death through meditation guided by the hosts in Bhutan, among many other wonderful experiences. 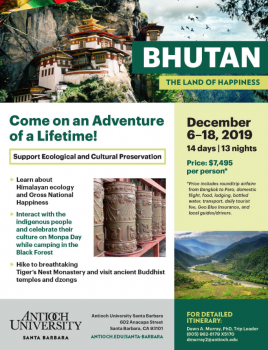 As Dr. Jeremy Goldberg said on his podcast Long Distance Love Bombs, “if you want to get intimate with life, you have to get intimate with death.” So perhaps to truly experience the fullness of life, this should be a typical conversation to have when casually getting drinks with friends.