Trending Now
You are at:Home»Lifestyle»Travel»Explore and Experience: Travel Tips for Your Next European Adventure

Why Should You Travel?

Traveling throughout different countries around the world is an important experience everyone should be able to have. Once you set foot in a new country and immerse yourself in the culture around you, many amazing things happen. A few reasons you should travel are:

This past summer, I was able to take an amazing trip to Europe with my family. For three weeks, we traveled across Germany, Austria, and the Czech Republic, spending roughly a week in each country as we visited different towns. I’ll admit it wasn’t always easy being with my family 24/7 for three consecutive weeks, but the experiences I had and the stunning scenery gave me a new understanding and appreciation of the world we live in. If you ever think about taking to trip to any of these countries, I highly recommend you consider exploring some of these locations. 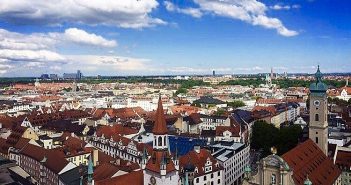 Located just north of the Bavarian Alps, Munich is the third largest city in Germany with a population around 1.5 million people. When I first arrived at the airport and saw Munich for the first time, I felt like I was in a familiar city like Boston. A few things I suggest you might do in Munich are:

Visit a beer hall: My parents wanted to take me to an authentic beer hall for dinner, which I would definitely recommend to anyone. Trying to pronounce names in German is amusingly difficult, but it gets easier as you drink their beer. The beer hall we went to was called Hofbräuhaus München and was basically a giant dining hall lined with tables full of fun people drinking beer and eating delicious German cuisine. We also got to see a traditional German band playing live Oompah music. 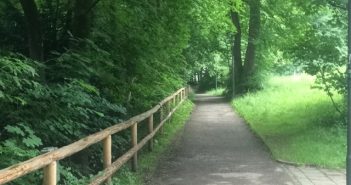 Walk around the city: Munich is a beautiful city that I think is best seen walking around on foot. Using a  simple map on your phone, you can take a tour of the city where you can see historic buildings and monuments. There is the main park located downtown called Englischer Garten that has stunning views of a small lake and surrounding meadows. It had been raining when we walked through the city, so all the shrubbery and vegetation was really green and full of life. 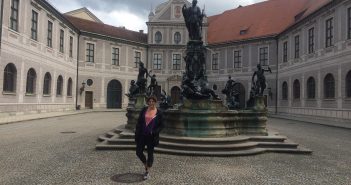 One of the many courtyards in the Munich Residenz

Visit the Munich Residenz: This historic landmark is the former royal palace of the Bavarian Monarchs who ruled over the land beginning in the 12th century up until the late 17th century. The Residenz is made up of three different sections including ten courtyards and is the largest palace in the entire country of Germany. When I toured the palace, the entire tour took a few hours to complete, as there is just so much history to learn about throughout the elaborate halls. 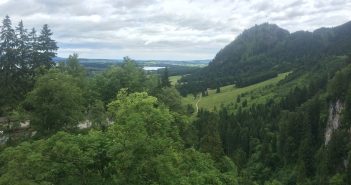 The countryside town of Schwangau is located just at the base of the Alps that separate Germany from Italy. This town looks like a postcard as the scenery is beautiful with green fields everywhere and spectacular views of the mountains. While this town is relatively small and remote from large cities, there are some fun sites tobe seen: 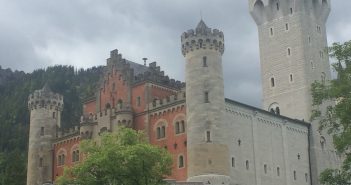 Neuschwanstein Castle: This palace sits upon a steep hill on the mountain and has sweeping views of the surrounding countryside. Built as a retreat home for King Ludwig II of Bavaria, the king funded this palace from his personal fortune, and eventually went bankrupt as he continuously built more onto the building. As the palace was sold as a public attraction after the king’s death, the building remained unfinished, and the king’s original plans never came to fruition. A cool fact about this palace is that Walt Disney used the architecture of the castle as inspiration for Sleeping Beauty’s iconic castle. 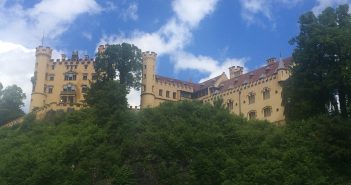 across the ridge from Neuschwanstein Castle, and is the childhood home of King Ludwig II. The royal family mostly used this palace for hunting trips or other exclusive retreats. When Ludwig II took the throne after his father died, he continued to live in Hohenschwangau with his elderly mother as he developed plans to build his own castle on the hill above which eventually became Neuschwanstein Castle. 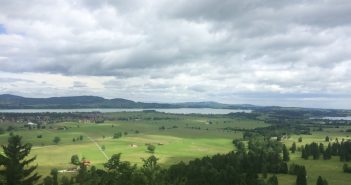 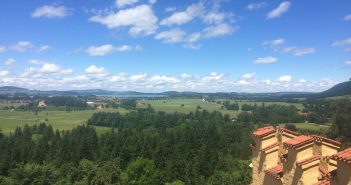 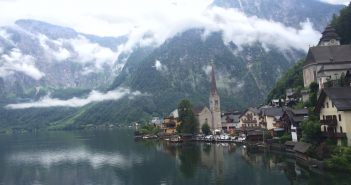 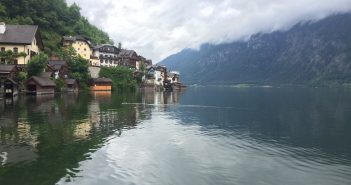 Sitting upon the eastern shore of the lake Hallstätter See, this small village is tucked away in the mountains of the Alps. Famous for being a world heritage site, Hallstatt resided one of the first mines of salt, a highly valuable resource in prehistoric times. My family hadn’t known about this beautiful town until we met someone from Austria on the plane who highly encouraged us to visit this village during our trip. Hallstatt is very small and can be easily toured on foot in under a half hour, but I could have spent hours basking in the site of the stunning mountains and lake. This is one of the top sites I would recommend you have to see. 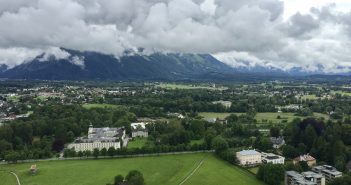 Located on the Salzach River, Salzburg sits at the northern boundary of the Alps. The name of the city translates to “salt fortress” as salt was primarily shipped on the river alongside the city. A cool fact about this city is that The Sound of Music filmed some of the scenes in Salzburg. This compact city has many great things to do such as: 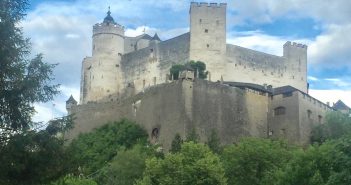 r fortress as many call it, sits atop a small hill in Salzburg and is one of the largest medieval castles in Europe. Built in 1077, the castle was able to defend off enemy attacks for over seven hundred years as it was continuously strengthened as more buildings were built onto it. During World War I, the castle was used to hold Italian prisoners caught by Nazi soldiers. This castle has amazing views of the city from the viewing platform at the very top of the fortress, and you can even see the Von Trapp mansion along the lake used in film scenes from The Sound of Music.

Salzburg’s “Old Town”: This small area of the city is famed for its baroque architecture and for being well preserved north of the Alps. You can wander the streets and immerse yourself in the history of the city as you walk along cobblestone roads. The “Old Town” is mainly made up of small shops and restaurants now, so it is a great place for tourists to stroll through and see the old architecture.

Visit Mozart’s Childhood Home: Wolfgang Amadeus Mozart.was born in Salzburg, and gained attention for his talents at a young age. He  performed for royalty when he was just 5 years old. His childhood home is currently a museum about his life, and how he significantly influenced the style of classical music. 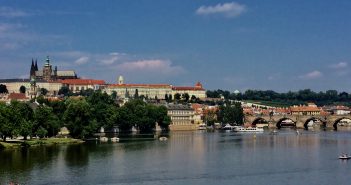 Prague Castle sitting above the river

Located on the Vltava River, Prague is both the Capital and the largest city in the Czech Republic. Out of my entire three-week trip, this city in particular was my location to visit and explore. The city is made up with two sections divided by the river flowing through the city. One side is more modernized with paved roads and outlet shops, and the other side is more “Old-Town Prague” with cobblestone paths and architecture preserved from the history of the town. While I could spend weeks or maybe months in this amazing city, these are a few great spots to check out: 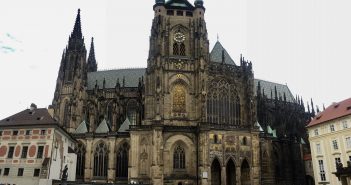 Tour Prague Castle: This historic palace is the largest ancient castle in the world and is one of the most visited by tourists in Prague annually. The Castle sits atop a hill on the “Old-Town Prague” side of the river and overlooks the surrounding land. The castle was built back in 870 for the Duke of Bohemia and today is the official residence of the president of the Czech Republic. During the few hours I toured the castle, I was most mesmerized by the enormous St. Vitus Cathedral in the center of the castle. 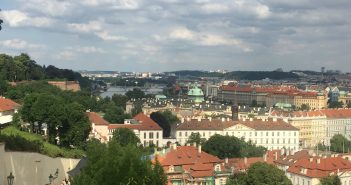 Walk Around the City: While we spent our time exploring all over Prague, I liked spending time on the “Old-Town” side where there was more culture visible. The cobblestone roads and architecture of the buildings gives you the vibe of the history of the city. If you want to get a great view of the city, you can take a tram ride up above the city. From there you can see the enormous Prague Castle and the river dividing the two parts of town. It is one of the best sites to be seen.

These are just a few of the cities and towns we saw during our trip. From this amazing experience through these European countries, I learned so much about the culture and history of different cities that I might otherwise had not. It’s one thing to learn about an ancient castle from a textbook, but once you are actually walking the halls and seeing the elaborate architecture in person, it is a completely different perspective. Besides just learning about other countries’ history, one of the most important things I learned from my European adventure was to think outside myself. Sometimes California, or Santa Barbara for that matter can feel like bubble, so it was so refreshing to finally to see parts of the world I didn’t even know existed. To anyone thinking about traveling the world, GO DO IT! Start planning your next adventure so you too can experience the amazing wonders the world has to offer.

“Exploration is really the essence of the human spirit.”- Frank Borman

Sarah Humphreys is finishing up her bachelors degree at Antioch University Santa Barbara after previously being enrolled at Santa Barbara City College. While at Antioch, she's been working towards completing her bachelors with a concentration in Psychology. Born and raised in Santa Cruz, California, Sarah moved to Santa Barbara a few years ago when she was beginning her college education. Outside of school, she enjoys being outdoors in nature, going to the beach, hiking or kayaking with friends.