Trending Now
You are at:Home»Literary»I Have Been Swimming and You Should Too

The classic image of a vacation spot is a sandy beach with a few palm trees, all arrayed beside an expanse of shimmering ocean. Add to this image a chair and a towel and you’ve got a picture-perfect postcard. 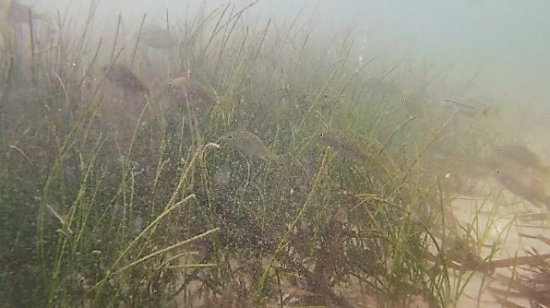 No coral in sight, just sand and green, yet there is still a battalion of fish hidden among the seaweed.

This postcard would be incomplete. The shore is only part of the story. The other half lies hidden beneath the waves. For most people, when they picture what is under the waves, they see sunken pirate ships with hidden treasure or sea monsters with too many teeth. It seems like the only way one could reach these exotic locales is scuba diving. This conjecture is only partially true. While there are truly wondrous places deep down on the ocean floor, there are just as many along the shoreline. Here, there are no commitments or certificates required. All you really need is a snorkel and a mask, and any stretch of coastline turns into a wild aquarium.

You may not find any aliens, but you may look like one from underneath the water.

Stepping into the water, the three concerns are the eyes, the lungs, and flotation. With a mask and snorkel, oxygen urgency and ocular irritation are both eliminated, and salt water is naturally very buoyant. What is left is only swimming, in pursuit of sights previously unseen. The ocean is a beauty unto herself. This past summer, I visited Florida for the first time. I had no plans, but I took a snorkel and a mask, and what I discovered were visions more interesting and immediate than any nature documentary. These were not from some curated selection of coral reefs, but from otherwise scraggy bits of coastline. Majesty can appear anywhere, and underneath the waves reside the closest thing to alien life we are likely to ever see.

This is the realm of fish. What a dazzling array, from big to small, bright, dull, transparent. And each one almost seems to have their own personality. There was one tiny little blue and yellow fish that, deciding I was some monstrous sea creature that would keep him safe, followed me for an hour. There were the great silvery schools of fish, one eye concerned, whirling around me in a circular torrent, trying to confuse this massive creature. On the outskirts, not part of the crowd, were those indifferent fish, the ones that would let you get close enough to almost touch them, drifting beneath rocks and waiting for something to happen.

Underneath even seemingly deserted areas are regions teeming with life. This is just one part of a giant school, engulfing all directions.

In the midst of all this life comes a realization: this feels good. Not only in sight, but also in sensation. In the distant past, to be active was merely survival. We humans often get a bad rap regarding physical abilities in regards to the rest of the animal kingdom. This isn’t quite true. There is one area wherein we excel above all others: endurance. We are the unceasing nightmare of the fleeing deer, gasping as it stays just ahead of the pursuit, something it can never quite escape. We are the ultimate predator because we never ever stop. At least, that’s what our bodies think. Nowadays, I have a car and the supermarket, and I am not chasing down any fleeing deer. But our bodies still crave physicality, and not just isolated exercise, but an extensive full body experience like swimming.

There are even ancient ruins, although this rusted trap and overgrown rope are straining the definition of ancient.

Swimming is visceral. Swimming washes away illusions. We lose consciousness of our too familiar limbs in the air. In the water, an awareness is regained. The surrounding water is absolute and somehow not, crushing and somehow not. And to cut through is magical and powerful. It is the fulfillment of one of the most basic human needs, to exert an action upon the world and see the consequent effect.

Rock lobsters like to hide under rocks. This extreme predictability is probably the reason why they never quite made it as apex predators.

One time, I surprised a rock lobster out in the open sands beneath the waves. He turned to face me, and then started to run backwards. He backed repeatedly into things, scrabbling over rocks and seaweed until eventually finding a large enough shelter that he felt safe hiding underneath. On the other hand, the cormorants were not quite as timid, wheeling overhead, shrilly stating their displeasure at this large creature splashing in their hunting grounds. 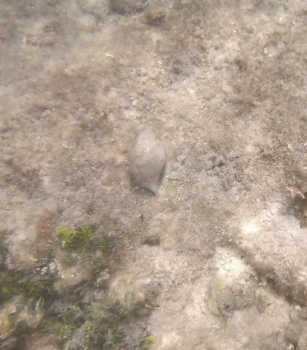 The difference between a crab and a shell does not quite show up in a photograph, but I can assure you this fellow was moving as fast as he could.

In the ocean, I found crabs too, the kind most commonly found on plates, shuffling sideways, with eyestalks distrustful. The other kind, too, the hermits that are eternal vagabonds, who, if picked up by their remarkable shells, will not hesitate to pinch with all their tiny might. With heads protruding, grumpy eels sneered and glared, just hoping for some peace. Mysterious and decayed wooden barrels, fallen off some forgotten ship, had tails waving lazily, and then came the sudden primal realization of how that particular fin shape signifies a sleeping shark only a few feet away, dreaming of blood and the hunt. And above it all, the glorious shining sun, worshipful warmth, with waves breaking into salty oblivion beneath the cry of birds.

Featured photo by Roman Odintsov on Pexels. All other photos taken by Alan Lemerande.

Alan Lemerande is an undergraduate student pursuing a degree in Creative Writing and Literature at Antioch University with an expected completion date of December 2021. He believes in the importance and value of words to create thoughts and reality, an opinion which has been reinforced and enhanced during his time at Antioch. Alan’s great passion, other than words, is travel. He has been to Alaska and Florida, and most places in-between, but his favorite experience was sandsurfing down the dunes in the Sahara to an audience of camels. This adventure, as well as other experiences, has taught him the importance and joy of the harmony and balance between mind and body, an aspect he hopes gives his words life beyond the pixels that give them form. He enjoys cooking and cinema in his spare time.