Trending Now
You are at:Home»Features»Arts & Entertainment»7 Nights of Karaoke

Who knew there was this much karaoke?

Santa Barbara is know for a lot of reasons, but one of those reasons people don’t know it for is karaoke. If I told you that you could go to karaoke every night of the week in downtown Santa Barbara would you believe me? Well, it turns out that you could! Karaoke downtown has been big since the early 1990’s there was a dip in the beginning of the early 2000’s, but in 2007 it came back with vengeance. The group of avid karaoke patrons is only growing with every bachelorette party that finds it’s way to Santa Barbara.

Karaoke at the James Joyce

Victor Vega hosts karaoke at the James Joyce on Sunday and Monday nights. We spoke for a while about how he got started and what he has noticed in the past two years or so he has been hosting karaoke. Victor has been singing karaoke for the past 20 years or so, along with being in multiple bands over the years. He also is currently the lead singer and percussionist for “The Bomb” and has been for almost 18 years. He took over karaoke about 2 years ago at the James Joyce and loves it. He said karaoke has been going strong for at least 10 years now. He believes so many people enjoy karaoke because music is a universal language. I learned from him that some bars pay for all the equipment and some ask the host to provide their own equipment. James Joyce tends to have a slower country vibe with amazing singers. Victor visits many other karaoke nights including Whiskey Richards, Dargin’s, and Bo Henrys. He had a few words for people thinking about joining in, “Aspiring singers come sing! It’s all in good fun!” 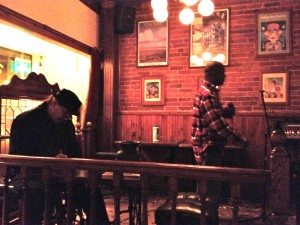 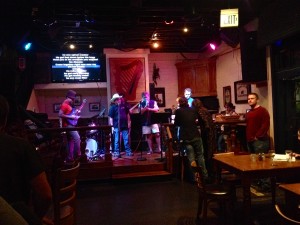 Eric Andrade hosts karaoke at Whiskey Richards on Saturday nights. He has been hosting karaoke at Whiskey Richards since 2011, although he used to host it in Las Vegas, Nevada. He has been an entertainer since he can remember. He loves hosting karaoke, because it gives him a chance to be an entertainer and get great use of his amazing soundboard and system. Whiskey Richards karaoke tends to be very interactive. It has a very Rock N Roll vibe to it. Eric told me that there is no competition among karaoke nights and that they all support each other. They all have their own nights and their own styles. Eric believes karaoke has gotten more and more popular down town, because people are very musically influenced in Santa Barbara. We spoke about how there is a core group of people that tend to go to karaoke at every bar every night of the week. One of the karaoke veterans who goes to a lot of karaoke nights, including Whiskey Richards, is Mike Herrera who is also known as Too Tall. Mike has been singing karaoke in Santa Barbara since 1994. Whiskey Richards karaoke allows everyone to feel like a rock star. Eric’s words for aspiring karaoke patrons were, “Don’t be afraid and I’ll do the rest.” 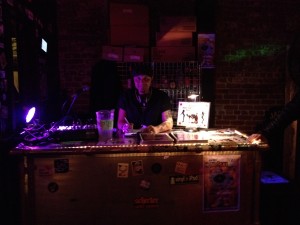 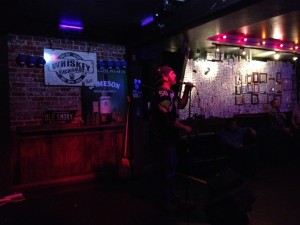 Every karaoke night has a different vibe and style. Some you sign up, some right you in, and some you turn in slips. There is a website that allows you to see when karaoke is happening every day of the month and the addresses these are located at http://www.karaokesantabarbara.com. There are so many amazing karaoke nights and one of the newest ones is Wednesday night karaoke at Dargin’s with a live band. The band is The Selections and they bring a whole other vibe to karaoke. You are not up there alone and they create a level of comfort on the stage. They also are extremely talented and really help create a fun attitude! The bars that host karaoke include James Joyce, La Rumba, Cliff Room, Creekside Inn, Wildcat Lounge, Bo Henry’s, Dargin’s Irish Pub, Old Town Tavern, Uptown Lounge, Jimboz, Monty’s, Tiburon Tavern, and Whiskey Richards. Thank you to all the bars that allow everyone to have a voice and express their feelings. Next time you find yourself in downtown Santa Barbara think about stopping by one of these amazing karaoke nights!