Trending Now
You are at:Home»Current News»Environmental»Gaviota: The End of Southern California

For the past 5 years I have dedicated my life towards documenting the wildlife & natural beauty of the Gaviota coast, Southern California’s longest remaining stretch of wild coast. 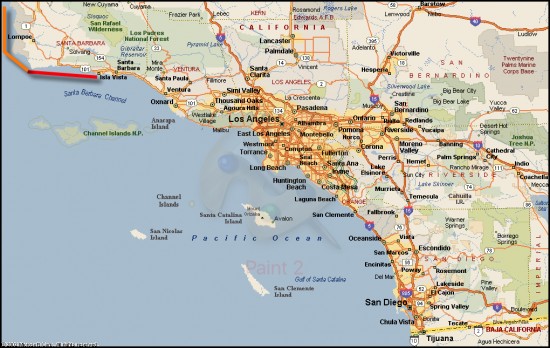 The Gaviota coast extends westward from Coal Oil Point to Point Conception, from there it heads northwards to it’s terminal at Point Sal. This stretch of coastline is recognized as one of the most biologically diverse regions in the world. Because of it’s natural beauty and rich resources, the Gaviota coast is under constant threat of habitat fragmentation through both residential and industrial development, the southern region in particular. 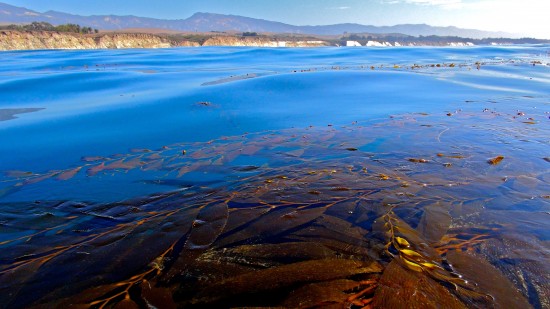 I was born and raised in Santa Barbara and spent much of my youth playing and exploring the Gaviota coast. Family road trips to the north began and ended along the stretch of highway 101 that divides the sea and the summits of the coast. Gazing north towards the Santa Ynez mountains, crags of sandstone rise from the blueish blanket of chaparral, while to the south the spouts of Gray whales can be seen in the Santa Barbara Channel, beyond the big blue lay the mysterious Channel Islands. My first memory of sleeping in a tent was at El Capitan campground, and later in life I would catch my first good wave at Refugio beach. In high school, surf pilgrimages to Jalama beach often took priority over Spanish 101.

In my early 20’s I began working as a outdoor guide, leading kayaking and hiking tours on the Gaviota coast and Channel Islands National Park. While working I was simultaneously enrolled in environmental science classes at Santa Barbara City College. I was fascinated by the processes of earth and nature and for the first time in my life excelled in institutional academics. 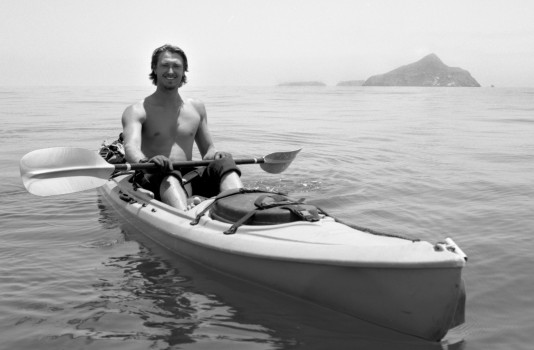 Clocked in somewhere between Santa Cruz and Anacapa

The combination of my experiences guiding in the wilderness and the knowledge gained in the classroom gave me a new perspective and appreciation for the coastline I had always know as home. Along with this new outlook came the realization that I was responsible for protecting my home from the environmental horrors I had learned about in my classes.

In 2009 my chance to do something about the environmental crisis came. Shaw Leonard, my best friend and Brooks Institute student, brought to my attention the plight of the Gaviota coast. He was in the process of directing a short film for the Naples Coalition, The Future of the Gaviota Coast. This film detailed the history, ecology, and grassroots struggle of the Naples Coalition against Orange County developer Matt Osgood.

Though lacking knowledge in filmmaking, I volunteered to help in anyway I could; mainly acting as sherpa lugging camera gear, traversing sketchy mountain roads, and tracking wildlife in search of the perfect shot. Shaw shared his cinematography knowledge with me and in return I shared my local environmental knowledge. We made a good team. 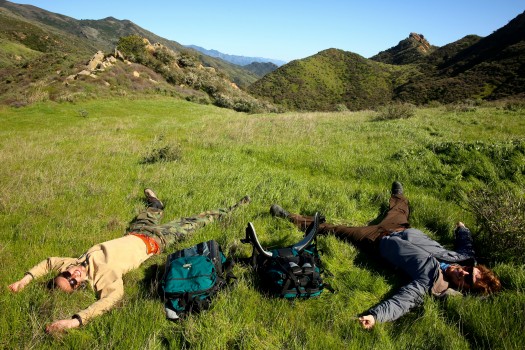 The Future of the Gaviota Coast was accepted into the SBIFF and not long after Osgood went bankrupt, leaving Naples secure for the time being. After completing the film, Shaw and I faced the reality that almost as soon as the film had been released, it had become outdated due to the ever changing politics regarding land-use and transfer of ownership. It was then that we decided that the only film which could save the coast and protect it forever, was one that concentrated on the coast itself. It was time to focus the camera on the animals, plants, beaches, canyons, and mountains that make this coast so special.

We settled upon the title for our next film, Gaviota: The End of Southern California, both for it’s geographic meaning, in that Point Conception is the northern boundary of Southern California, but also that the beginning of the coast, Coal Oil point, marks the end of urban sprawl that goes almost uninterrupted all the to way the Mexican border. With funding from UCSB’s Coastal Fund we we’re able to purchase the camera equipment we needed to get started on a project that we expected to take 1 or 2 years.

Or so we thought…

Five years later we are in the final stages of completing the film, putting the final touches on a piece that we feel well represents this extraordinary corner of the earth. We’ve undertaken every adventure we could think to get the shots required to craft a story that does this coast the justice it deserves. Everything from SCUBA diving at Naples reef, so that we may capture a glimpse of the underwater world, to soaring thousands of feet above the coast in a single engine plane shooting aerial footage. 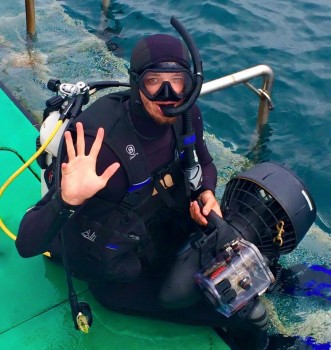 We’ve been sunburnt, dehydrated, hypothermic, sea sick, air sick, and just plain old sick. I’ve been bed ridden for days with poison oak in my eyes and everywhere else. We’ve lost thousands of dollars worth of camera equipment to the elements, missed the birthdays and holidays with our love ones to chase animals and storms, said farewell to girlfriends who didn’t understand, and met new ones who did. The sacrifices have all been worth it though, because we’ve known the entire time that these have been some of the best years of our lives.

Our most memorable trip was a climb up Arroyo Hondo canyon that set the bar of difficulty that I still look to when undertaking any outdoor journey. A late March rainstorm was forecasted to collide with the mountains and we knew it was our chance to capture the canyon’s waterfalls in their full flowing glory. The first day of the trip began at the beach where the canyon’s waters returned to the sea. The plan was travel through the open passage of the riparian forest to make our way to up the canyon, filming the falls, and finding a spot to pitch our tent halfway up the canyon, before reaching the headwaters the next day. 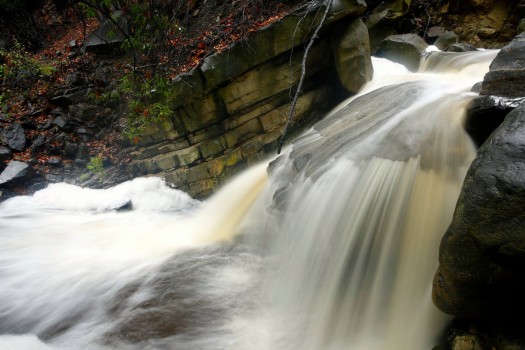 Little did we know that this quick overnight trip would turn into 3 days of bushwhacking through poison oak, climbing rain-soaked sandstone, and hoping our food and flashlight batteries would last longer than they should. The chaparall was so thick in certain areas that we ended up clambering over it rather then through it, sometimes supported 15 feet high in the canopy of manzanita and ceanouthous shrubs. 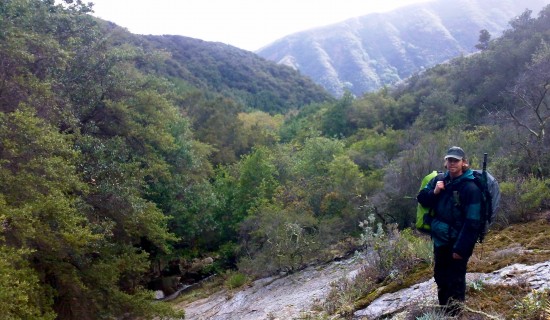 A rare break in the dense chaparral

As light began to fade we realized that another night in the tent was inevitable. We found the most level ground we could, hunkered down, and devoured our last meal. The following morning we we’re greeted by friendlier skies which rejuvenated our spirits. We broke camp and continued our slow crawl for another 4 hours until we hit the fire road that would take us to our ride and eventually home. 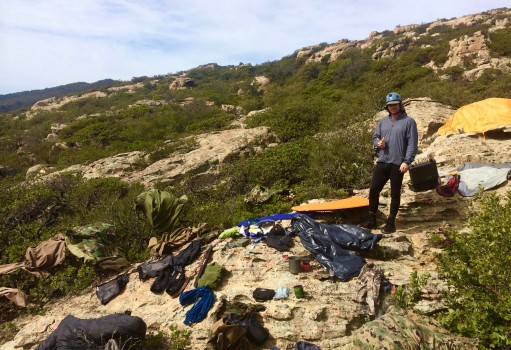 Our goal with this film is to create awareness and generate support the creation of a Gaviota National Park or Seashore. This has been considered before. In 1999 congress passed legislation authorizing the National Park Service to conduct a feasibility study regarding the creation of a federally controlled park on the Gaviota coast. The study was completed in 2004 and died a quiet death due to lobbying efforts from private landowners on the coast and an unenthusiastic presidential administration known for its unfriendly environmental policies.

The time has come to reconsider this proposal for the protection of the Gaviota coast. Our aim with this film is to generate support for it.

The Sun sets on the End of Southern California