In San Bernardino, California every year there is a race held at one of the most famous motocross tracks in the world for motorcycle enthusiasts, called the JBC 24 Hr. Endurance race at Glen Helen.

Preparation for a 24 Hr. long motorcycle race can be very repetitive. Making sure that you have plenty of goggles, gear, water, electrolytes, food, and so on. Getting ready for this race was unlike any other that I have competed for in the past. I was on a team and we were all racing the same bike, so I was mainly responsible for taking care of me and making sure that I was feeling good. Nevertheless, I did what I could to help get the bike ready when I arrived at AHM Factory Services, where the bike was being built. We were all excited and nervous at the same time. We had everything we needed and as race day got closer and closer we wanted to take it more seriously and really try to do our best. Our team consisted of a great group whom all knew how to ride really well. Some of us were more active in riding/racing than others, nonetheless we are all involved in the motorcycle industry and knew what what it was going to take to not only do well, but finish the 24 hours of being on a motorcycle.

Making some final adjustments to the race bike the night before.

The race would allow us to have 6 riders and our main goal was to have the bike going the whole time. Our plan was to minimize crashes, ride smooth, and smart. Being the youngest on the team and the only one that had never done this race before I knew I wanted to ride smart and try my best to not let the bars touch the ground. Even though we were all going to out there to have fun, once you’re a racer you are out there to win and we had all the resources to do so.

As the beginning of the race was approaching we had our plan, riding order, and bike ready for battle. The race was going to start Saturday October 15th, 2016 at 10:00A.M. and was going to be coming to an end Sunday October 16th, 2016 at 10:00A.M. It was a full 24 hrs of dusty, rough, rocky, sweaty torture. At the beginning of the race we were running up towards the front and everything was going smooth. This was the key to doing well in this race, keeping the bike on 2 wheels because a bad crash by one person has the potential of braking parts on the bike that could end our ride or slow us down exponentially.

I had my first section on the bike around 2 p.m. where I rode 3 laps coming back into the pits about an 1 hr and 10 min later. We were doing great, pitting to fill up with gas, changing the air filter, swapping out new tires, ect and then around 7 P.M. the sun started to go down, changing everything. Riding at night is a different monster as I quickly came to realize. Without strong reliable lights it makes it difficult to hit speeds of over 80 mph in the dark. Luckily we had some of the best lights by Baja Designs, known for making some of the best off-road equipment. 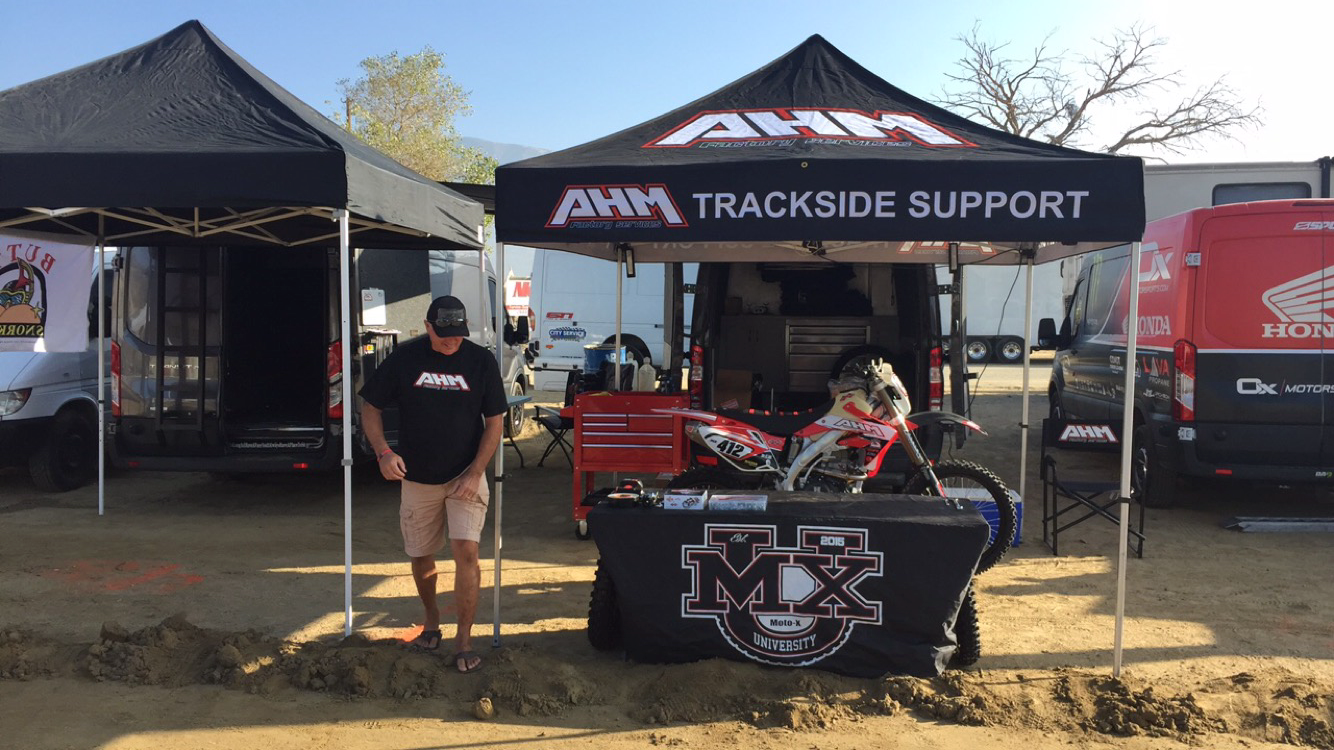 The set up of our pit

As the sun disappeared and the stars came to life we realized that the alternator on our motorcycle had not been charging the battery all day and come dark we had no lights. This was a big issue that costed us about 45 minutes with all hands on deck trying to figure out our light issue. As we diagnosed the problem, a broken fuse, we still had to charge the battery. The only way to do that was to run the bike and as the sun went down we were able to get 1 more lap in charging the battery and getting it ready for night to hit.

Around 10:30 P.M. my 2nd time on the bike had come and our light issue seemed to be fixed. As I started my first night section the light in the bike started to flicker but I knew that we had already lost enough time to this problem that I was just going to have to rely on my helmet light and put down some laps. Not forgetting to mention that racing a motorcycle in the middle of the night is one of the coolest experiences I have ever had the chance of doing. As I came across the pits the team pulled me in after only 1 lap because they saw the light having issues. I stepped off the bike and it looked like a nascar race as they switched out the light to another system fixing all issues with the lights for the rest of the night.

After losing a total of about 1 hr and 15 minutes total to messing with lights at this point it was time to start gaining some ground on our competition. We were sitting in 4th place but as night passed we were able to gain some ground. The heavy fog started to create rain and made it difficult to see on the tops of the mountains. This forced us to ride without goggles as the early morning started and that seemed to be working best for all of us. As I finished my 3rd ride on the bike at 2A.M. we had all kept a steady pace moving into 3rd place and gaining on 2nd. As I headed to the motorhome to get an hour or so of sleep till I rode next the team was able to put the bike into 2nd place. We were unaware of this at the time and thought we were still in 3rd place.

I was the last rider on the bike riding from about 8:30a.m. sunday morning till 10:05A.M. to finish out the race. Coming around on the last lap of the grueling 24 hour long race had me smiling like a 5 year old on christmas morning. It has been a dream of mine to do this race since I was a kid and on my first year I was bringing it home for the team. As I crossed the finish line the entire team was there to congratulate everyone that was racing and celebrate a solid ride by all six of us. As I grabbed a frosty cold beer in celebration to our achievement and looked around me, I could tell that the smile on the team and myself was not going away anytime soon. We had some issues with the bike, but our riding prevailed and carried us to a 2nd place finish in the Open Expert class which superseded our expectations by a longshot. I sit here now a few weeks after and when I look back on the great times, it puts the biggest smile on my face, motivating me to do it again in the future and continue racing. And hey if we can finish 2nd in the open expert class with losing time to bike problems, I wonder how we can do when everything goes perfect.