Trending Now
You are at:Home»Features»War on Wildlife

If there is one thing America is best at, it is declaring war.

Both in the traditional manner; war on other countries and organizations, but also in the metaphorical manner; war on drugs, terror, and poverty. The American and global public are familiar with most of these wars, however there is another which has been kept in the shadows of the wilderness, a war waged by our federal government, funded by our tax dollar, and kept hidden by those who profit. This secret war has been declared on wildlife. I write this in hopes to make the public aware of the millions of animals and tax payer dollars wasted every year, and to remind ourselves that our relationship with wildlife has not always been so destructive.

Worshiped to Wiped Out

The relationship shared between humans and wildlife is as ancient as humanity itself. For millions of years man has been not only predator and prey, but also has co-depended and co-evolved with our wild kin. This primordial relationship began to transform with the domestication of the wolf 30,000 – 12,000BP and continued with the domestication of food bearing plants and other wild animals which over time evolved to what we are all familiar with today as food. As our dependence on these domesticated lifeforms increased, our relationship with the wild ones began to decline, for the wild predators of land threatened livestock, crop success, and occasionally a human life. The agricultural revolution was a major shift in humanity’s relationship with nature. This was the first time in history that humans no longer had to travel as nomadic hunter gatherers in order to secure an abundant and consistent source of food. The roaming tribes who previously hunted and gathered now had the opportunity to put down roots and concentrate on the pursuit of knowledge, thus creating the foundation for civilization. 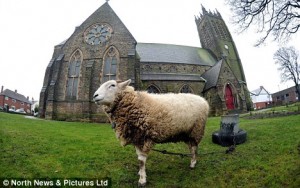 Thousands of years after the agricultural revolution, the first monotheistic religions emerged in the Middle East. These Judeo-Christian traditions presented an anthropocentric view of the natural world. According to these religions, God created the earth for man and only for man. Wild animals and everything else for that matter, only existed to be of use to man. These beliefs shaped the early environmental ethics of Western society and is the root of so much misunderstanding today.

“And God blessed them, and God said unto them, Be fruitful, and multiply, and replenish the earth, and subdue it: and have dominion over the fish of the sea, and over the fowl of the air, and over every living thing that moveth upon the earth,” (Genesis 1:26-28)

Passages like the one above influenced the belief of Manifest Destiny, the idea that the North American continent was given to the pioneer whites by God himself and that those natives who have been living on the land for thousands of years were no different than the wild beasts, in that they must be tamed or destroyed. As the frontiersman continued their westward expansion across the plains, no quarter was given to the creatures they came upon, human or otherwise. Dreaming of creating a pastoral landscape, these pioneers killed every predator within rifle shot. Massive herds of Buffalo were annihilated in effort to destroy the rebellious natives food source. The pioneer mentality has survived to this day in the psyche and practices of many Americans, thus influencing our out-dated policies regarding wild things. 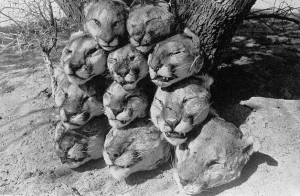 Wildlife Services is a branch of the U.S. Department of Agriculture. A federally funded program – with an average yearly budget of $100,000,000 – which is responsible for the vast majority of casualties in the wildlife war. Every year the Wildlife Services kills thousands of domesticated and millions of native animals. Aerial gunning, trapping, and chemical poisoning are just a few of the lethal tactics employed. Considered a threat to livestock and farmers crops, wolves, coyotes, bobcat, black bear, grizzly bear, and other fauna face endless systematic destruction, often dispatched in the most brutal of ways.

“…large terrestrial carnivores have declined by 95 to 99% from their habitats around the world and in North America.” Source.

This is regardless of the fact that these animals are responsible for less than 1% of the mortality statistics regarding our domesticated animals, weather and disease being the actual killers. Perhaps the reason “…the U.S. Department of Agriculture’s Wildlife Services ignores the positive role that predators play in their surrounding habitat, as demonstrated through their reckless practice of killing large numbers of predators. Wildlife Services has a long history of persecuting predators, considered competitors for game animals such as fish and elk, and viewed as threats to livestock and agriculture.” Source. These persecuted top predators fill important ecological niches that are essential to the health of the ecosystem including those species in which they prey upon. By preventing ungulate herds from over grazing and over producing, predators also play a part in engineering the ecosystem by providing nutrients for flora and habitat for smaller fauna.

One Pack for Another 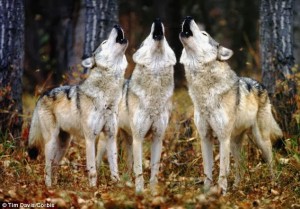 Despite the best efforts of first the pioneers, settlers, and the Wildlife Services, coyote population and range have expanded beyond their traditional boundaries. The expatriation of the grey wolf in the U.S. created a void in their predatory niches of the wolf ecosystem. “The reintroduction of wolves, however, restores these habitats, and additionally reduces coyote populations, thereby boosting pronghorn antelope and other small mammal populations.” Coyotes have been quick to fill this role ever since, though wolf reintroduction efforts are slowly reestablishing packs throughout the Mid and North West. “Furthermore, exploited coyote populations have been shown to have increased juvenile reproduction and larger litters, which suggest that control measures may actually increase coyote populations.” Source

Call of the Wild

For millions of years these animals were central to our life, they were our first deities, the subjects of our first pieces of art, and were imitated in ceremony and everyday life. With the domestication of a few species flora and fauna, we have lost touch with most others. Human health is dependent on a thriving environment, therefore I see the actions of the Wildlife Services as an indirect assault upon human beings and one which we should all be aware and critical. Acting upon a sense of stewardship and love for these creatures, I feel that it is necessary to bring this secret war to the attention of the American public so that we may begin the process of transforming our destructive relationship with wildlife to one of symbiosis and admiration.