Trending Now
You are at:Home»Features»Opinion»Trump’s First 100 Days: How Music Has Helped Me Through

I Thought Music Could Be My Escape, but it has encouraged me to resist more.

Ever since the 2016 election started, mass media has been flooded with negativity and vitriol, and that dark cloud has affected anyone that hasn’t been living under a rock. Many people try to escape the real world by doing something distracting, like checking their Facebook feed, or binge watching their favorite shows. But when the political cloud started raining down “fake news” and hate-filled tweets, and the shows we looked to for comedic relief became less funny than the actual election, where could people turn to escape? For me, it was a simple matter of putting my headphones on and getting lost in the music.

I didn’t think music could push me to being more political, but ever since I listened to the Hamilton soundtrack for the umpteenth time, I fully realized how much music can make an impact on society and culture. When politicians annoy the average person, we may take to Facebook or Twitter, or put a sign on our lawns and get on with our lives. When politicians make the mistake of upsetting an artist, they may end up upsetting the entire fan base that comes with them. America caught just a glimpse of how musicians and other artists can get involved in politics when Senator Bernie Sanders brought his rallies, led by rapper Killa Mike, to areas that were not typical campaign stops. Or when artists like Queen, The Rolling Stones, and Adele had to send letters to Donald Trump to stop using their songs at his rallies because they didn’t agree with his rhetoric. When artists tried to flex their popularity to sway voters one way or the other, I became more interested in the influence that the election had on the music instead of the influence the artists had on the polls. While some artists tried to use the climate and events to make their music reflective of cultural values, or just ride the wave to sell records, there are musicians that are trying to give back to the community and become part of the resistance.

As someone opposed to the current administration and trying to find a way to help threatened programs such as the National Endowment for the Arts or Planned Parenthood survive during the next four years, I have sought out alternative ways to help through music and will provide links to them here if you feel inclined to do the same.

30 days, 30 Songs started as a project to get Americans out voting and prevent a Trump presidency, and has evolved to become an expanding list of songs to provide a soundtrack to the resistance. Created by Author Dave Eggers and Indie Music Executive Jordan Kurland, the website will be adding a new song everyday during the first 1000 days of the new administration. All streaming profits and donations will be donated to The Center for Popular Democracy, a foundation that “works to create equity, opportunity and a dynamic democracy in partnership with high-impact base-building organizations, organizing alliances, and progressive unions.” The playlist features a multitude of artists from wide-ranging genres. I learned about this project after watching the video for Death Cab for Cutie’s song “Million Dollar Loan”. 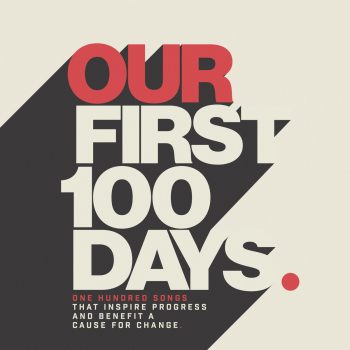 Similar to 30 Days, 30 Songs, this project is releasing new songs during the first 100 days of the presidency. For a minimum contribution of $30, donors can get unlimited streaming access to all of the songs while supporting programs that fight for equal rights and treatment like the ACLU, The People’s Climate Movement, All Above All, and Southerners On New Ground. These organizations help to protect LGBTQ communities, unrepresented minorities, and Climate Change advocates from losing vital support and government influence. Typically artists are trying to sell their music for personal gain and profit, but this formula flips the script by letting community members support worthy charities and public programs while getting something in return.

One of my favorite pieces of music that came from the election chaos was inspired by the imagined thoughts that President Obama was having during the final days of the campaign. The words were written by Sara Bareilles and performed by Leslie Odom, Jr. of Hamilton fame. The lyrics dig deeper into the question that many people may have had about the thought of Donald Trump being the Republican nominee: “Seriously?”

To me, the most powerful piece of music was inspired by the Women’s March that took place across the country on January 21st, 2017, only a day after the inauguration of Donald Trump. A group of women got together in Washington D.C. to sing “Quiet”, written by MILCK, about the artist’s experiences with sexual assault. Sung a cappella, this haunting song captures the raw emotion that the march was based around. It became the unofficial anthem of the March and has become a viral phenomenon.

While many people are inclined to try and tune out all of the negativity that is stemming from the political turmoil, I would suggest that they look to this music as a reminder that out of bad situations, good things can happen. I myself am a singer and husband to a music teacher, and I have found music to be more cathartic than just about any other activity. The Trump administration have already proposed measures that would defund the Endowments for Arts and Humanities, as well as the Center for Public Broadcasting, all of which supplies grants and support for a number of visual and performing artists.

I wish to share with you a powerful performance in a style that I hold dear; Barbershop Harmony. This is “Bridge Over Troubled Water” performed by the Westminster Chorus from Southern California. To me, it speaks to the helping hand we can lend to anyone or anything in need, and I listen to it anytime I need a little encouragement.  I urge everyone to find ways to support organizations that may need help due to the new policies being enacted. The more organized and motivated we are to see change, the faster that change will come to be.

Bobby Georges is originally from Sacramento, CA. After many starts and stops in his educational journey, he graduated from Santa Barbara City College with his A.A. in Marketing and Communication Science. He is currently pursuing a BA degree with a double concentration in Marketing and Communication at Antioch University Santa Barbara. He worked as a chef for 9 years in fine dining both in Sacramento and Santa Barbara. When he isn’t at school, he likes to spend time with his wife Courtney, traveling, eating, and singing Barbershop Harmony.