Trending Now
You are at:Home»Current News»Community»Are You Ready For the Big One?

Nestled between rolling hills and the Pacific Ocean, Santa Barbara inarguably is a beautiful city. Unfortunately, the beauty of the city belies an uncomfortable truth. Santa Barbara, like most of the state of California, is literally sitting on an imminent threat. At any moment, an earthquake can strike. In fact, it seems that California—Southern California in particular—is primed for a large magnitude earthquake. In the next 30 years, there is a 99.7% chance of a magnitude 6.7 or larger earthquake happening according to United States Geological Survey seismologists.

An earthquake of such a magnitude could cause untold damage. The last major earthquake in Southern California—the 1994 magnitude 6.7 Northridge quake—caused 57 deaths, more than 8,000 injuries, and billions of dollars in property damage. The last large earthquake centered in Santa Barbara happened almost a century ago (1925 to be exact) when the area was much less populated, but the magnitude 6.8 earthquake still caused 13 deaths and over $8 million in damage.

We know that a large, and potentially destructive, earthquake can rock the Santa Barbara area at any given time. The question is-what can we do to prepare ourselves and our homes for such an event? I asked several students around Santa Barbara’s Antioch campus about their earthquake preparedness. Some students, like Anna Anthun, said they did not have anything prepared in case of a major earthquake. Others, like Julie Nataas, said they had partially prepared. Julie has an earthquake kit, but it isn’t complete yet, and she is still working to form her earthquake plan. She currently has water, food, and cash prepared in case of an emergency. However, some students, like Doug Caesar, are fully prepared. Doug has a full kit prepared in both his home and car and a plan in place in case the big one hits. His kit includes water, food, a first aid kit, and even a camping stove. Everyone living in Southern California should be prepared for an earthquake. The American Red Cross provides excellent list of what you should know before and during an earthquake.

What to do Before a Quake

• Have a household evacuation plan. This plan should include knowing escape routes from the household, deciding on a meet-up place if the members of the household become separated, knowing who is responsible for what in case of emergency. Phone numbers and emergency contacts for all household members should be accessible to all. This plan should also cover what to do with any animals in the household.
• Have an emergency kit prepared. You should have a kit for your home and work, and possibly one in your car. This kit should include: 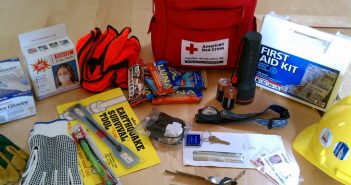 What to do After a Quake

• Drop (get down close to the ground)
• Cover (get under a sturdy piece of furniture)
• Hold On
• Stay inside till the shaking stops
• Exit immediately if you smell gas
• Turn off gas if there seems to be any damage to the building.
• If you are outdoors try to get away from buildings, streetlights, power lines, and trees
• If driving, pull over at a location away from bridges, overpasses, and power lines.

If you are not prepared when an earthquake strikes, or your house is not safe, you should look for the nearest Red Cross shelter. If you are stuck at home without an earthquake kit know that you can survive roughly three weeks without food, and roughly 100 hours without water.
Santa Barbara, for all of its beauty, also holds danger. It is likely that at some point, in the not-too-distant future, an earthquake will strike. By preparing ourselves for this event, we have the best chances of survival.