Trending Now
You are at:Home»Lifestyle»Travel»From Brazil with Love

A Frenchman living in California, lay eyes for the first time on Latin America.

Paris, 9am, about to be stuck on a plane for 10 hours, with only ridiculously tiny bottles of wine to talk to. Not particularly enchanting , but worthy boredom nonetheless, since leading for the first time to Brazil.  I was one sleeping pill away from paradise! Not that California or France aren’t close to heaven, but you know what I mean…

Guarulhos International Airport of São Paulo, 6am, first steps in Brazil. I get into a car for about an hour, and arrive to Vinhedo, which could be the equivalent of Santa Barbara, if we compared Los Angeles to São Paulo. A sunny, peaceful, and wealthy town, surrounded by vineyards. 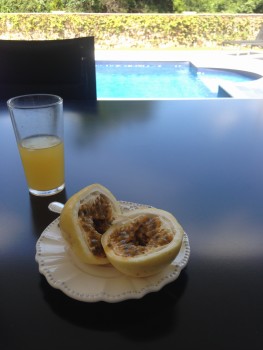 In an attempt to fight the jet lag, and get my groove back, I asked about the eventuality of getting breakfast, when I realized a Maracuja and some juice were waiting for me by the pool. Brazilian mood step one. It was love at first sight! You have to understand I am a little crazy about fruits, and I highly recommend that one to anybody with taste buds! It is what we know as passion fruit, and not only it is delicious, but it also has a lot of healthy benefits. For a Frenchy to have access to fresh exotic fruits like papaya, guava, guarana, caju, mango, or champaign oranges, is a rare pleasure!  Brazilian mood step two. Sit back relax, and tan by the pool, listening to monkeys yelling at each others, jumping from a tree to an other. Who can say no to that? 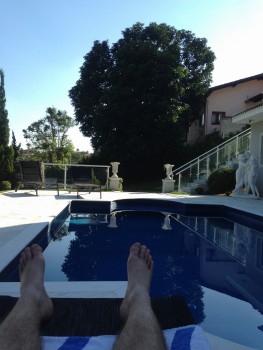 Day 1, “sit back and relax” sip your Maracuja!

Being from a big city, it used to be hard for me to just relax, and do nothing, but I have to admit all these years in California helped me work that out! If you think you know what chilling is, you haven’t seen anything yet. Wait until you get introduced to the Brazilian ways.

To get a quicker understanding of the culture, I then decided to enter the “Yes Man” mode; which basically imply saying yes to whatever plans your entourage has in stock for you.

We went from going to local markets, great restaurants or bars, all the way to soccer stadiums or trips to other cities. With only fifteen days ahead in this country, I had to make the best out of my time there.

The food in the restaurant was refreshing by its variety. For those like me who thought the Brazilian food was all about rice and beans, I happily found out how wrong I was after tasting pão de queijo, coxinha, real açaï, and other local specialties based on sea food. However, where they really excel, is in the meat department, and I apologize in advance to the vegans and other meet intolerant, for the picture that follow; but Churrasco (grilled meat) is the Brazilian guilty pleasure! You sit down in a place where the waiter gives you a chip on which the green side means “bring me meat” (and trust me when I say they have all the best kinds you can imagine), and a red side that means “let me breathe for a second”. It goes for as long as you can eat! 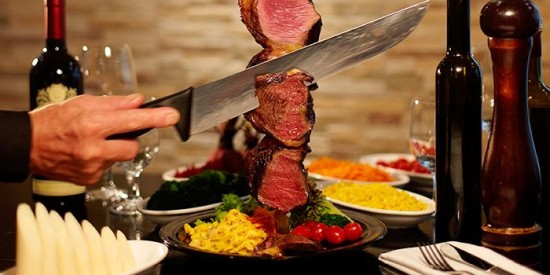 You then get some caïpirinhas, with a local amount of cachaça in it, and will find yourself understanding how Brazilians enjoy the simple things of life. French and Brazilians have different ways, but I learned how they were meant to get along. Same love for food, and little pleasures of life; both cultures are “Carpe Diem” oriented.

Both cultures are also soccer oriented! And in a country where “futebol” is a religion, my next step had to be the stadium! Luckily, the team of São Paulo was playing that week, and I witnessed a beautiful victory 6-0, after the team had lost its four last games. Some of my friends said that the “gringo” was a lucky charm!  Talking about soccer for hours with locals, helped me earn some credit, and blend in smoothly, I was “a gringo who knew his classics”. 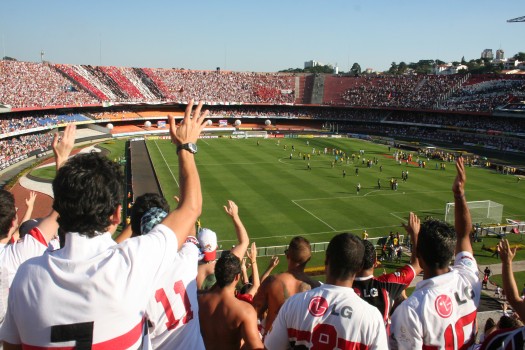 After São Paulo, and Vinhedo, I had to visit one more town to have a larger understanding of the differences within the country.

I followed my friends lead to Florianopolis for my last few days. It was honestly the best place I have seen in Brazil. A very “surf friendly” city, where a gigantic lake is open on the ocean. Most houses around have their own privet  little peer, and the everyday dilemma is wether one should take the boat or the car! Everyone can access places like bars, and restaurants with their paddle boards, jet skis, or anything that can float… It is not uncommon to see people getting back home after a party, with fancy clothes on a jet ski! 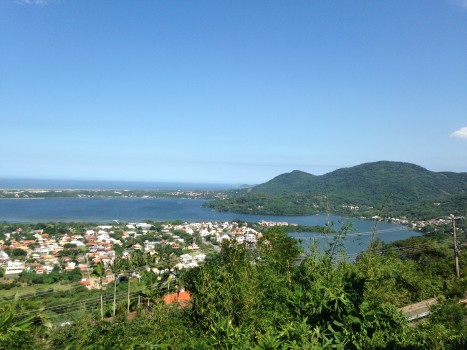 What I enjoyed the most in Florianopolis (beside of course this paradisiac environment), was learning in few days how to stand on a wake board. A guy tried to teach me, pulling with a little boat, but unsuccessfully!  However when he switched to his jet ski, I started to stand on the board, and after few falls, I actually managed to ride some waves. Brazilian mood final step!

The guy wasn’t speaking English, but still managed to teach me through gesture, and key words. I stood up for the first time on the wake-board, way faster than I did when learning how to surf (while the friend trying to teach me was French). I think about all the riders in this school (Niklas, I know you’ll be reading this somehow), you guys would love it.

This trip to Brazil was memorable by many aspects, and cheaper than you would think, since you have to consider than a dollar or a euro is worth 4 reals (the local currency). You just divide all your expenses by 4, so most of the time your wallet won’t limit your imagination! The trip to Florianopolis by example, which was 3 nights and 4 days, in a duplex apartment for 4 people with jacuzzi on the patio, cost $150 per person including a plane round trip! If the government wasn’t so unstable (it makes the country scary to invest in), the place would be heaven on earth for a Frenchy tired of the Parisian stressful daily life.

Wether you are a student, a young professional, an older professional 🙂 or retired; Brazil will find a way to keep you interested, and is definitely worth the detour! 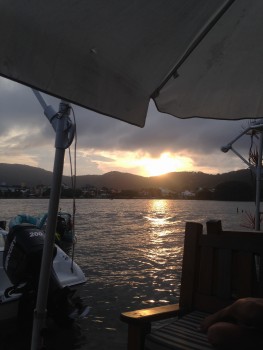 Florianopolis sunset, after a day wake-boarding. 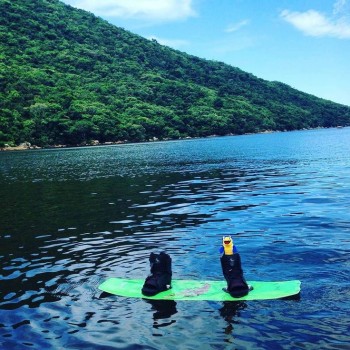 who wants to jump in?