Trending Now
You are at:Home»Features»Arts & Entertainment»The Responsibility of Fiction Writers

For all the many opinions about the responsibilities of fiction writers when it comes to advocacy, there is perhaps a single, reasonable, bare-minimum standard that writers can be held to: do not make an issue worse.

It’s true that fiction writers don’t necessarily have a greater responsibility to participate in advocacy than anyone else. However, we do still have responsibilities. There are countless examples of media containing elements of bigotry that could have been easily avoided, had the writers used the tools available to them.

One can argue that fiction isn’t held to the have ethical standards of journalism, and it’s true that fiction has no obligation to teach its readers moral lessons. Furthermore, care must be taken to avoid crossing the line into censorship. However, it is easy to check for common problems, and considering that Nazi indoctrination included children’s books, as noted by both the Smithsonian Magazine on the International Museum of World War II and the U.S. Holocaust Memorial Museum, it’s unreasonable to say that nothing should be done.

The Harry Potter series has garnered a lot of attention for its many bigoted elements, as well as the author’s persistent transphobia. Rowling’s decision to have goblins run the bank plays on antisemitic stereotypes, which was pointed out by comedian Jon Stewart in a podcast episode. The discussion was picked up by a multitude of others, including an article by NBC News that goes in-depth into the stereotypes involved. Furthermore, the film designs of the goblins look, as described in another article by Forbes, “practically indistinguishable from a Nazi propaganda poster.” As noted by multiple review sites like The Gamer, the recent game Hogwarts Legacy goes even further, setting the players against the goblins, who are rebelling against the oppression of wizards. There’s also a plotline about the goblins kidnapping wizard children, which is strongly reminiscent of blood libel.

There are also the house elves, which are essentially slaves who like being slaves, and are never freed in any of the books or films. Rowling’s attempts to expand her wizarding world are also racist; particularly how she expanded her worldbuilding with her History of Magic in North America (HOMINA) essays on Pottermore.

An article written by the editor for Native Peoples magazine, who is herself “Miniconjou Lakota and an enrolled citizen of the Cheyenne River Sioux Tribe”, analyzed the issues with HOMINA and the American wizarding school Ilvermorny, including “pan-indigenous language, which treats ‘the Native American community’ as a monolith; a Eurocentric storyline involving European wizards teaching indigenous wizards to use wands, which are implied to be superior; history that is presented only in relation to white wizarding ‘explorers’ and immigrants; and objectification of tribally-specific beliefs and values, such as the ‘mascots’ for Ilvermorny.” 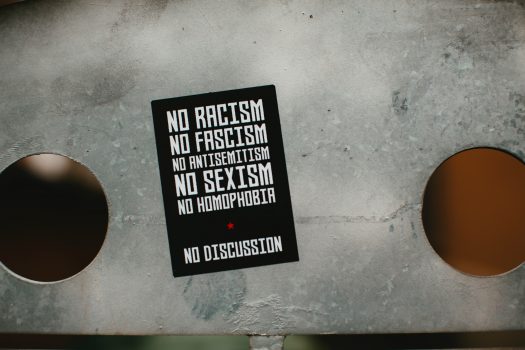 Photo by Markus Spiske on Unsplash

In addition, she argues against the defense of it being fictional by mentioning how schools continue to perpetuate the myths of Thanksgiving and Columbus, and how her daughter has to deal with stereotypes in school. This is further supported by studies about the negative impact on Indigenous Americans such as “‘Frozen in Time’: The Impact of Native American Media Representations on Identity and Self-Understanding.”

These were not comprehensive lists of all the issues with these works, and there are many more elements of bigotry, including but not limited to: sexism; fatphobia; homophobia; transphobia; ableism; and stigmatization of mental illness through the misusage of words like psychotic or psycho to mean crazy, violent and dangerous. There is no reason to allow bigoted jokes, designs, and caricatures to exist in the final product, because their only purpose is to perpetuate that bigotry by teaching it to children.

None of this is to say that people cannot enjoy these works, or any work that has similar issues; to do so would be foolish, because nothing is “pure.” It is also not to say that every fiction writer whose works have these problems did so out of malice. No one is perfect and everyone has something to learn, myself included. I happen to enjoy Tales of Arcadia, even though I think it would be better if the writers had not written in the issues that they did. However, neither ignorance nor permanent imperfection are excuses to avoid working to reduce the issue, which can be helped by creating an easily-accessible toolbox of resources for writers to use.

An already-existing resource is to hire sensitivity readers or beta-readers, who go through the work to look for issues, which the writer can then edit out. There are blogs like Writing With Color, which, in addition to giving Q&A-style writing advice, offers resources and guides centered on racial, ethnic, and religious diversity for writers. Blogs like this can be used for naming characters, and figuring out when it is and isn’t alright to use certain tropes and stereotypes.

If there aren’t already, there could also be hotlines for writers like the Science and Entertainment Exchange, which connects filmmakers with experts to “create synergy between accurate science and engaging storytelling.” In addition, checklists could be created to screen for issues; for example, a checklist of antisemitic tropes and stereotypes.

As an (admittedly new) fiction writer myself, I am working to hold myself to this standard, because I want to avoid recycling bigotry in my works. My attempts will not be perfect, and I will make mistakes, but that won’t stop me, and it shouldn’t stop others. Let’s do the work.

Cailin Maertz is a student at Antioch University in the Liberal Arts, Literature, and Creative Writing program, having transferred after graduating from the Liberal Arts Transfer Program at Madison Area Technical College. She writes analysis on fictional works and writing conventions, as well as real life topics such as the climate crisis and other social justice issues. She also writes fiction, predominantly Urban Fantasy, and has nearly completed a short story called The Crow’s Familiar. She lives with her family in Madison, WI.