Learning How to “Act Now” From Dove Rose Grennan 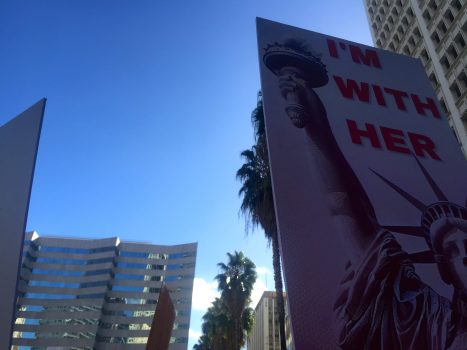 It is clear after speaking to Dove Rose Grennan for a few minutes that she is not your ordinary woman. It is also clear that despite the gracious sincerity of her voice, or how many times she says the word transformational, Dove means business.

You might be wondering who is Dove Rose Grennan, and is that her real name? Well, I don’t know if that’s her real name, but Dove is many things: a yoga teacher, an organic nutrition consultant, a meditation teacher. She performs all these roles under the umbrella of her own business, Dove’s Bodies, a holistic center in Hollywood. She is also the woman who is responsible for the creation of the Women’s March Los Angeles. This past week, Grennan agreed to chat with me about her latest contribution: creating a march for over 750,000 people.

When Donald J. Trump cinched the presidential election in November, Grennan was just like many of us: shocked. She was sitting in her dining room, on her laptop, trying to figure out what had happened. The next few days she was numb, her body reacting in a way it never had before. She describes herself as the type of person who gets stuff done. “If there’s a problem, I fix it. If someone needs help, I help.” So when she found herself on the Women’s March on Washington facebook page, she felt it was her duty to be there. 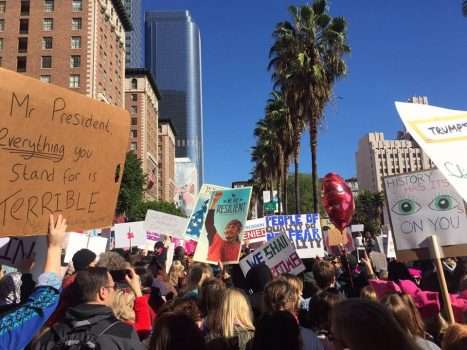 Grennan had booked tickets, she had made plans, but that all changed when she came across someone’s comment on one of the facebook groups. “We should have a march in LA,” it read, and she simply replied, “let’s do it.” A minute later, she found herself creating an event page by copying and pasting the mission statement from the Washington page, uploading a beautiful picture of a palm tree, and then heading off to teach a yoga class. She returned, two hours later, to 14,000 people signed up ready to attend.

From there, it just “blossomed.” She was inundated with comments and questions from people wanting to get involved. Everyone was ready and willing, they just needed direction, a place to go, she said. Now they had one. A few days later, she was hosting five women she’d never met in her living room and they were planning history.

The entire march was created with Facebook. Every task that needed to be done, every permit or equipment that was required, was accomplished through people on the group. Every facet of the march was filled by some stranger wanting to volunteer their time, money or connections to successfully create a march that brought together over 750,000 people. For all the flack that social media has gotten since this election, it was responsible for people being able to create change. Grennan had successfully created the first sister march. 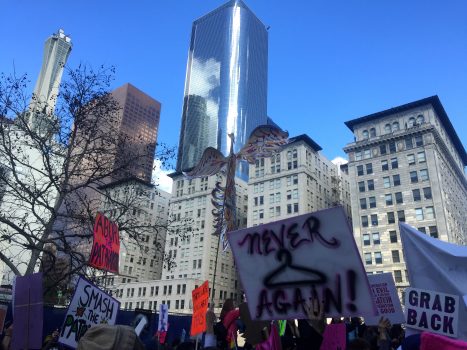 From there, life became a whirlwind of conference calls with National, and the ever increasing number of sister marches that began to spread like wildfire. Although each city brought their own flare to the experience, they were all in constant communication to ensure that the intention and the tone remained the same across the board. The most important thing for everyone was to stay united, and they did.

Currently, there have been no known reports of any arrests or real disruptions at any of the marches, making these marches the most peaceful in existence. Law enforcement remained extremely supportive in L.A., and all over. Several officers joined the marchers in Los Angeles. One california march told Grennan that all their officers donned pink caps in solidarity. Despite the major disruption that an influx of 750,000+ people can do to your neighborhood, she had no issue getting the march permitted, and being welcomed by the community.

After the initial creation of the March, Grennan found herself drawn to help volunteers, vendors, set-up etc, and left the executive decision making to the rest of her partners. Due to the amount of work required to put on a march of this size, she found herself almost in a bubble until the big day came. When January 21 rolled around, she was able to see the sheer impact this march had created, and so did the world. 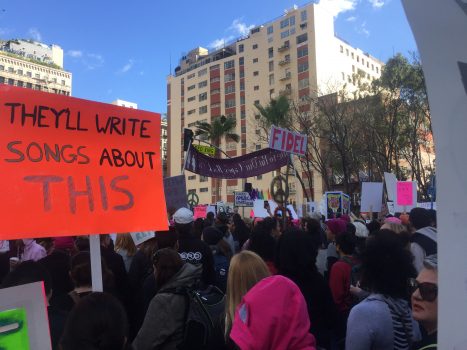 They spent the morning constantly on the go, but around 10:30 a.m. she described a literal shift going through the air, causing her to look up toward the street. It was then that she realized she could no longer see the street, “just signs, colors, and human beings.” They started to get wind of the numbers, and they realized they could no longer move because the streets were completely filled. “We realized everyone had shown up,” She said, her voice still thick with emotion.

But the march wasn’t just unfolding in downtown Los Angeles. Grennan received texts from volunteers that they were stuck at the metro station for up to three hours, or that they couldn’t find transportation anywhere. There were reports of people spontaneously just marching throughout the city and California when they realized they wouldn’t be getting transportation to Pershing Square. Grennan realized that she and her fellow organizers couldn’t even get to the places they had set up, that only the volunteers in those areas would be occupying them for quite some time. She heard reports of spontaneous dance groups breaking out, or motorcycles going through the march, and meditation circles being held at random intersections. It was impossible to bear witness to it all, but the people had made the march their own, and the city “kept expanding for us,” to make it all possible.

The day closed off with speakers at city hall, one of the more memorable experiences for Grennan. She described the crowd as “hungry for knowledge, guidance and direction, and boy did they get it.” There was somebody for everyone to relate to; a speaker that represented every type of person there. She felt like she was witnessing lives being changed. 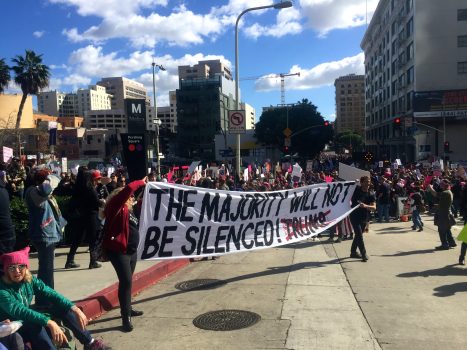 So where exactly does one go from that experience? She says they will be coming full circle, and deferring back to National for direction. Hundreds of people got involved in this march, and the march was only the beginning. Now people, including herself, she says, have to take a moment to reflect on what they’re willing to offer going forward. Everyone that volunteered was changed forever, many are changing their jobs, many have stated that they feel like their life has meaning now that it didn’t before. They will continue to rise, to work, and to stay united.

No matter what the next chapter brings, or the next march, one of the biggest pieces of advice Dove has for those wanting to get involved, is to act now. Don’t wait on them for direction, she says, though they will continue to provide it. The march was about getting people empowered, however, and showing them that they can be leaders, that they don’t need to wait for someone else to follow. They weren’t protesting Donald Trump, they were uniting their voices in order to rise. They were uniting for hope.