Trending Now
You are at:Home»Features»Opinion»Can Trump Ride Law and Order to the White House?

Visions of 68’ dance through our heads!

The protesters in California were thugs and criminals. According to Donald Trump, the presumptive presidential G.O.P. nominee we are a nation besieged by wild eyed radicals. Who are bent on destroying the very fabric of America, and it wouldn’t be the first time.

“There’s blood in the streets, the streets of Chicago” Morrison Peace Frog. 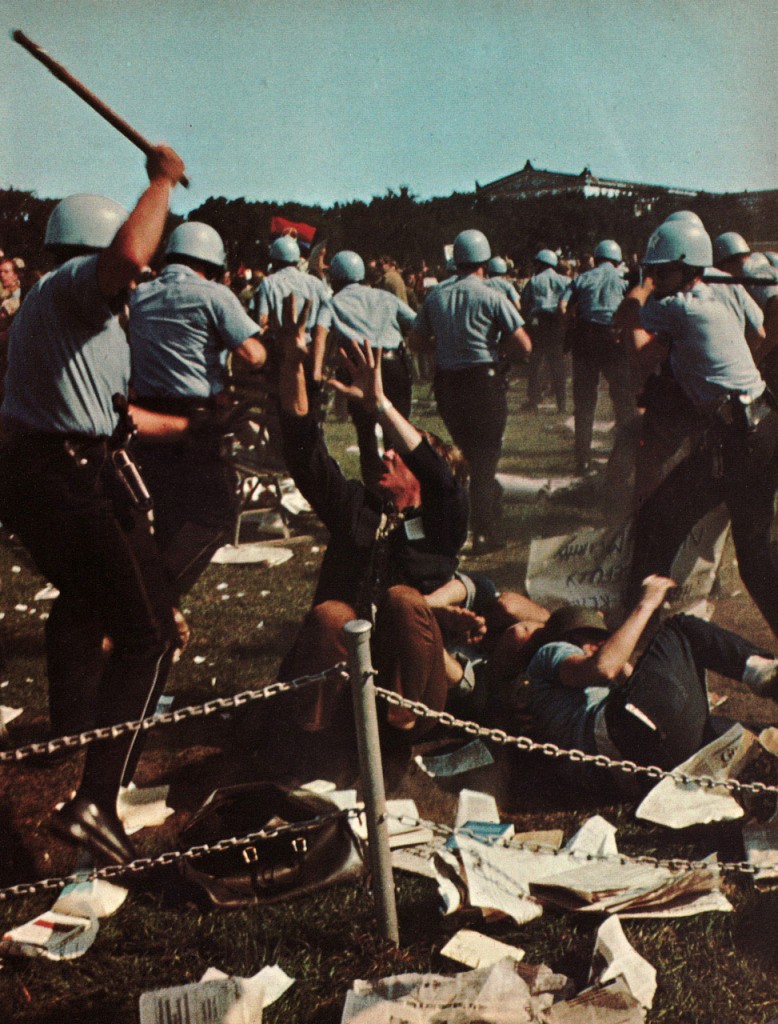 Back in August of 1968, America and the rest of the world were watching live television broadcasts of rioting at the Democratic convention. It had been a year of sustained political turmoil from the American Embassy in Saigon to the streets of Chicago. A conglomerate of largely student protestors, comprised of groups like SDS (Students for a Democratic Society), Abbie Hoffman’s Yippies, Hippies, and everything in between, had descended on the International Amphitheater. Thousands of young Americans came to voice their opinions, with youthful exuberance.

They were backing Humphrey, and McCarthy, and had a vision for America, that was a polar opposite of the working class and the previous generations.

On the opposing side, Mayor Richard Daley was backed up by a small army of police with the National Guard in Reserve. One could only guess that the protesters were prepared for some form of violence, but they had underestimated the forces arrayed against them. Richard Daley wasn’t messing around, and this is where the protestors ran out of road.

It is one thing to condemn the system or a given candidate. To actually get ones hands on it is quite another. Inside the convention there was a heated debate about Vietnam. Outside, there was a proclamation from the establishment. End of discussion.

Two generations later, America has witnessed riots and flaming debris, streaming through the airwaves and into our computer screens. Once again, the rebelliousness of youth has gone head to head with the old guard of conservatism. Except this time it’s only remotely related to our war(s) . It goes beyond politics, class, and color. Deep into the question of immigration, sexuality, and into the greatest fears of a fractured nation.

Trump had his moment in Chicago. Before things got too out of hand the rally was canceled. Not so in Costa Mesa California. As Trump vowed to build his wall and marched out the grieving relatives of Americans killed by foreign nationals, Mexican flags were being waved defiantly in the streets surrounding the event. While largely young Latino protestors blocked traffic and ramped up the general mayhem. 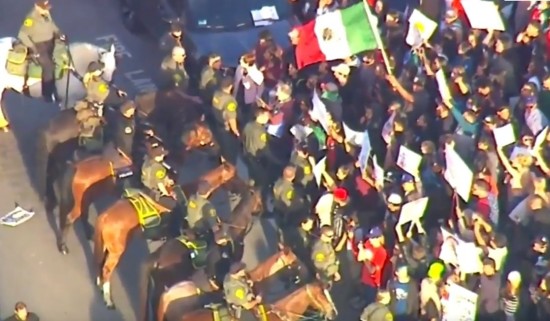 Responding police forces, contained the crowd while exercising an unexpected amount of restraint. Good press for them, but bad news for the Democrats. Just about every recent Trump rally has been disrupted by protestors, and so it goes. The rub is that each time this happens, another hundred thousand or so fence sitters silently vow to vote for Trump.

Hillary and Bernie (to the extent he is still a factor) are cringing in their rumpled pant suits. Foreign flags flying on American soil in the winds of teargas are tailor made for Trump. Talk about an angle for an attack add. When peaceful protests turn violent, America has traditionally voted for security over liberty.

Another twist to the 2016 election and the rise of Trump has been George Soros and his paid political mercenaries.

Soros first started the practice during the Ferguson unrest in 2014. Predictably, they tore up a rations worth of property and air time. In Costa Mesa, their part was overplayed. One can reject Trumps cries for nationalism as racist all day long. It just gets harder to sell on the evening news when the other side claims to be progressive, yet is seen to be destructive time and time again. 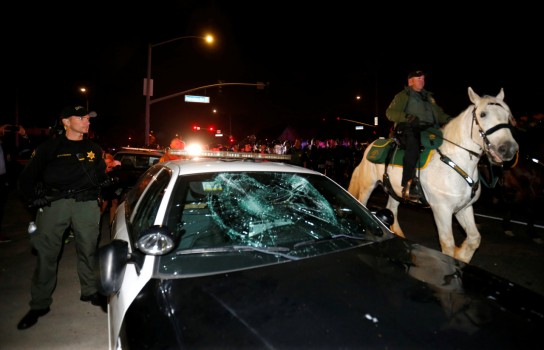 In 1968 Richard Nixon, (having himself been defeated by Television in 1960) now used the images from Chicago to galvanize the support of the as yet undeclared “Great Silent Majority”.

Come Hell or high water Nixon was going to have law and order. Just like Trump is going to “Make America Great Again”. What that really means is “Wait till they get a load of me. We’re going to stomp their protesting guts out”! So we can all get back to the business of watching Netflix with a clear conscience. Weather anyone wants to admit it is immaterial. Deep in the hearts of the average American is a fierce desire for the security of the familiar. Periodically, when the lid is pried off this prized possession, all manner of Pandora’s wrath is unleashed on an unsuspecting audience.

Typically the knee jerk response to this kind of provocation is to batten down the hatches and pull up the drawbridge. Followed by a fingers crossed gamble, that whoever becomes president “will clean up this $&@*& freaking mess and not be the one to drop the bomb.”

In a nutshell, this is Trump’s sweet spot. A here to fore unseen vanquishing of the “Thugs and Criminals”. Never mind that nationally the crime level is at its lowest levels since the mid- sixties. It is the mere thought of barbarians tearing down our gated communities that has always paid off in spades for the right. 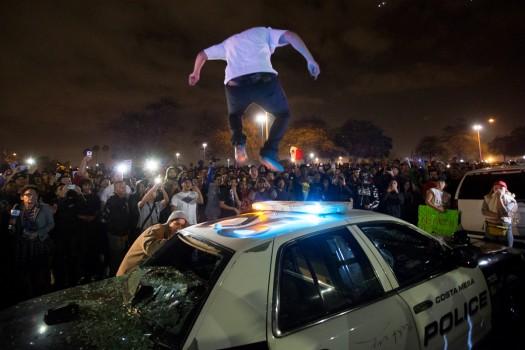 Coming to a gated community near you

The Donald knows this, and with every fired shell of tear gas his support grows.