Trending Now
You are at:Home»Current News»Politics»Protect Our Children in Schools

Are you feeling powerless when it comes to the safety of our children in schools? I’m feeling desperate for those in the power seat who get the final vote to steer us toward gun reform that protects our children. My daughter is in the 8th grade and every day when I send her off to school, my heart starts to race; knowing in the back of my mind that her safety is threatened. Each morning I watch her cross the street to the bus stop in her black high-top converse shoes and blue and green soccer hoodie that she loves; her dangling brown curly hair so innocently blowing in the wind. She so sweetly turns around and smiles with the biggest grin and waves to me. I genuinely smile back at her as if there are no worries, but under the surface, the fear is always there.

Her school is very open (it’s a California style, with no hallways-they must go outside after each period to their next class). There is no fence around the campus either, so essentially a perpetrator can easily enter the premises. Mass shootings have become the norm and it happens far too often, she and her classmates should be protected and feel safe, but unfortunately, that is not today’s reality. 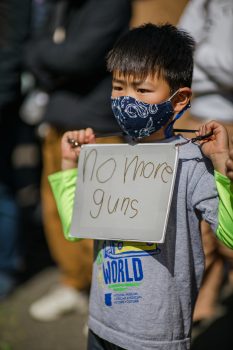 The Uvalde shooting has triggered immense turmoil for the families and the students who feared for their lives and witnessed bloodshed, with bullets rapidly firing toward them. No child should have to experience that ever. Sadly, school shootings happen all the time. As a parent, I feel helpless and devastated that our congress is holding up the opportunity for stricter gun laws. It’s the republican party that refuses to make changes for concern of being voted out of office. Their voters are attached tightly to their 2nd Amendment rights and refuse to make changes of any kind. They’re too concerned about losing their jobs instead of doing the right thing and saving lives. There have been 27 school shootings so far in 2022, with 83 people killed or injured.

The only way we are going to make real change is if we the people put in the effort and do what we can. It’s not hard. There are petitions you can fill out online only one click away. Most of us can do that. Reach out to your local senators. If enough of us speak up and fight for what we believe in then there’s a good chance our voices will be heard. We must strive and sustain faith and hope that positive gun reform can happen.

The Sandy Hook Promise is a great resource to learn more about what you can do to contribute to tighter gun laws.

Let’s make it harder to purchase a firearm. We need to restrict the kinds of guns that can be purchased. Assault-style rifles are mainly used in school shootings, and they allow the gunman to kill more people in a short period of time. They don’t have to take time to re-load which would most likely allow more children to escape. We need to reinstate the ban on these weapons.

Let’s make it harder for people to obtain firearms, by having extensive background checks and limitations on the types of weapons we can own.

Let’s make change together and prevent more innocent lives from being taken away from the heart-broken mothers and Fathers.

Join me in making a difference, sadly, we can’t rely on our senate (those with the power to change the gun laws on their own) so if you can please click on the link and sign the petition The Sandy Hook Promise or call your senator at 1-844-587-4406 or send a text message.

For those who can donate, please do so. I think the intention is more important than what it is you do to contribute to law enforcement on gun safety. Sand Hook Promise has made significant contributions to saving lives already but needs your help to continue this perpetual fight for gun reform; 339 confirmed lives have been saved with crisis interventions, 84 and counting Acts of violence with a weapon have been prevented, 9 planned shootings prevented, 115,000 tips anonymously reported, and 18 million participants nationwide. The effort is working, the hard work is making a difference.

Janna Bishop is an undergraduate student pursuing a degree in Literature and Creative writing. Janna is passionate about holistic wellness and has owned a holistic center, she taught meditation and energy healing. She is a certified Life Coach and with her strong intuition and energy background she loves to write about human experiences regarding personal growth, and inspiring stories that validate the human experience. She resides in Edmonds, Washington with her chef husband and her beautiful daughter who is also an amazing cook. She enjoys eating the delicious food they prepare, reading and writing. She’s always thinking about her next creative project.