– For some it might be, but not for those who don’t mind stepping away from the beautiful west coast for a bit. The cost of living in California is now just too high for your every day college graduate.

Life as a postgraduate student is not all it was worked up to be for us ask kids. For the 90s babies and those after that, we have been forced into a world of competitive job markets, impossible living expenses, and no direction as to what we should do once we graduate college.

It used to be, you go to college for four years, graduate, and then you have job waiting for you. Done. It was so simple back then; at least from the stories I was told as a child.

But times are changing and those examples are things of the distant past. 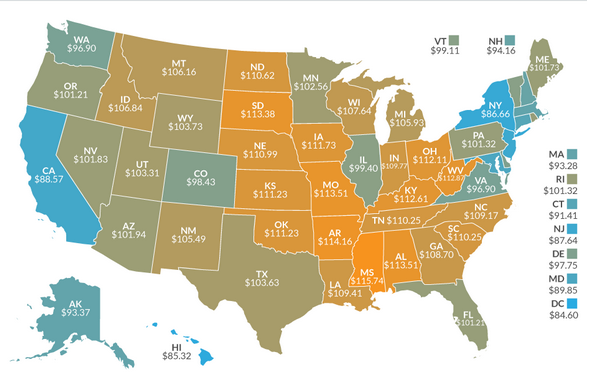 This chart shows by state in the U.S. how much $100 dollars actually gets you. California clearly near the lowest.

What is worrying me most however, is the cost of living on this part of the world. The communities all across California–Santa Barbara included– claim to be in dire need of young talented graduates. Okay, then how come these companies cant pay anyone enough to live in at the least a 12’ by 12’ studio here in Santa Barbara?

It is kind of sad to think that this state is depriving itself of a future. Students graduating college now are the future, and sadly we are being forced out of California as a result of the high cost of living.

In years prior one should expect to pay around 25% of your postgraduate salary on housing. That seems like a lot, but for us here on the central coast that is a joke. Rent has risen 18% in the last year in Santa Barbara County alone. With students spending over 75% of their monthly income on rent how are we supposed to survive?

The truth can hurt, but yes its true, though many local start ups and long term businesses are saying they are investing in the future–we are the future–there is still little to no pay that can cover the ever rising cost of living in Santa Barbara, or anywhere in California for that matter.

Many have told me that to get a good job you may have to take a hit financially, and start with a lower pay than what you make now. For most graduating students this makes sense, but for those who are already getting paid minimum wage, how is one expected to make less on salary than you do hourly; ha good luck. 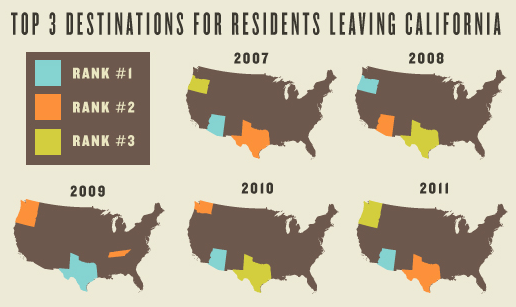 This info-graphic speaks for itself. What other choice do we have?

– But there is hope!

I personally have many friends, born and raised in Santa Barbara who, once they graduated college up and left because they had no other choice. Many of them were eager to leave, but a good amount of them couldn’t make ends meet if they wanted to follow their career goals.

In recent years various regions of Texas have been a calling place for the young aspiring professionals (as shown by the above chart). My two friends John and Tom, have moved there in the last few years and when I spoke to them about my concerns of living in Santa Barbara as a graduate they said:

“When I came to Austin TX  to see if I wanted to move here I instantly fell in love – Such nice people, great food, amazing culture, and so much opportunity, you’ll find a job here so easily.” – Tom U.

“Dude I love it here, I don’t want to move back [to Santa Barbara]there is just way more going on here. But  I will be bad to visit my hometown soon” – John R.

Coming from someone a little bit head of time in life this is re assuring to hear that there are places where one doesn’t need to sacrifice too much for a healthy life style, and from what I have heard Austin Texas is amazing. But that isn’t the only destination for post graduate job seekers. In the graphs above we have displayed all the best valued places where to people ages 21-35 are moving at an incredible rate. I don’t know about you but I think they could be onto something. 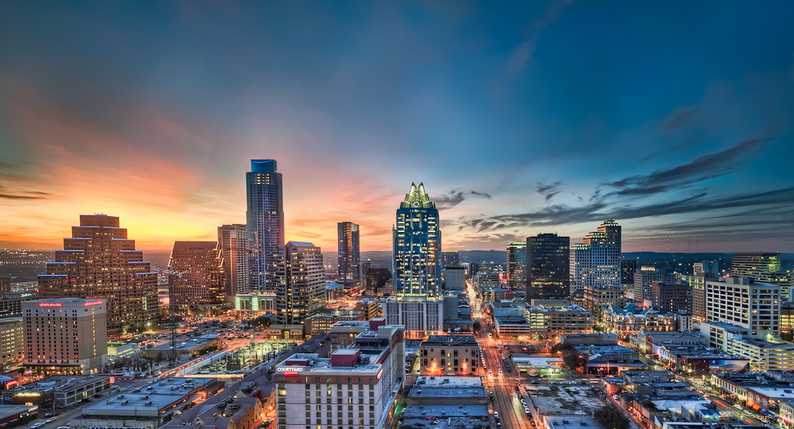 The choice may hard to make right now for some, but if we–as the future of this country–want to get ahead the answer is crystal clear. Don’t worry though California we will be back.