Trending Now
You are at:Home»Features»Arts & Entertainment»People Are Still Getting Out with Pokémon Go!

In July 2016, Pokémon Go became a worldwide success. Millions of players were walking around catching virtual Pokémon and bumping into each other—literally! With its two year anniversary just passing, many people have been wondering what happened to Pokémon Go. Most people don’t realize that the game is still so popular, as many as 20 million daily users across the globe. The game stood the test of time because of the players. The game is very social in nature: forcing players to meet up, make friends, and share contact information. It’s a modern twist on a familiar story, but instead of hanging around a basketball court to meet basketball players you make friends around virtual Pokestops.

One such person is Koreen Pagano. Koreen is a self-proclaimed “hardcore PG trainer” that has played the game faithfully since it began just over two years ago. Koreen is a member of the “Carp OG Pogo” group based in Carpinteria, CA. Koreen has learned to recognize other Pokemon Go players from across the street and makes new connections wherever she goes. “I live in a tourist town, and we see new people playing all the time,” Koreen says as she looks down at her phone to check for new Pokémon in the area. “I’ll just introduce myself and ask if they want to join in on any Pokémon raids while in town. We exchange info and I add them to our group chat.” Koreen, or KokoWoo as she is known in the game, estimates she has met and made friends with over 200 people over the years, some from Europe, Asia, and Australia as well as from all across the US. “It’s really become a social event. We need players to win the raids and people love to go back to where they came from and say ‘I made friends and beat a gym in America!'” 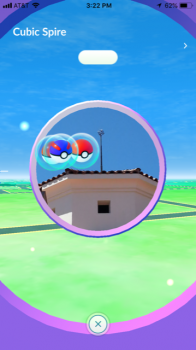 The Cubic Spire sits high atop Antioch University’s Santa Barbara Campus unknown to most, except the Pokemon Trainer!

Players like KokoWoo are noticing what researchers are just starting to figure out: you need to get out of your house and meet people to win. Scientists are beginning to report the beneficial effects that games like Pokémon Go have. Jane McGonigal, a researcher who has dedicated over 15 years to study the beneficial impacts of games, estimates that players are burning 571,000 pounds per day playing Pokémon Go. The game forces people out of their houses and to walk around, and the amount of physical activity these players are getting is astounding—especially for a group that is stereotypically sedentary in front of a computer screen. Not only does McGonigal see a trend in physical benefits from Pokémon Go, but “major mental health benefits are being reported as well—particularly for kids with autism and people who suffer from chronic social anxiety and depression.”

Even players who don’t suffer from anxiety can reap the benefits of Pokémon Go. The reason is how the game connects two different parts of your brain. Like a regular video game, players are drawn to playing for the dopamine rush they get by winning after being in some sort of virtual peril, like fighting dragons, or battling in a war. After you win once, your brain wants that feeling again, so you keep trying to win, and the danger gets more and more extreme. But Pokémon Go mixes the imaginary danger with the real world by using augmented reality. If you want to win, you need to get out and join forces with friends. If you don’t have friends, then you either make some, or your brain does not get the dopamine rush. Your brain usually gets what it wants, and friendships are born! Pokemon gyms and Pokestops can be anything from a famous landmark to a colorfully painted bus stop bench. Ever notice the Cubic Spire at the top of Antioch’s campus? That’s a Pokestop where players can collect valuable supplies. 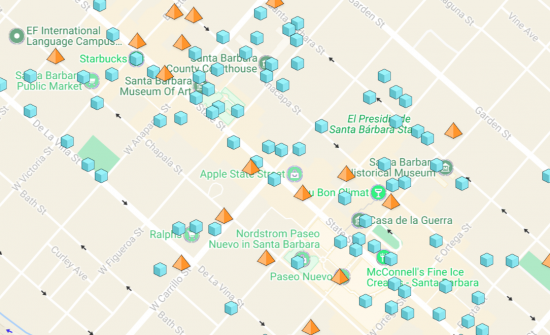 The State Street corridor has hundreds of locations where Pokemon Trainers can meet and interact- in the real world!

It’s easy to find Pokemon Go players in Santa Barbara. There are over 85 PokeStops and Gyms along the State Street corridor where players meet to battle and collect virtual supplies. Anyone interested in meeting other players only needs to hang around the fountain at Paseo Nuevo or the steps at the Santa Barbara Museum of Art, two frequently visited landmarks to many Pokemon Go players. Bob Ficarra, the owner of Metro Entertainment, runs a Santa Barbara based MeetUp where new players can learn the game and make some new friends. Wherever you meet other Pokemon Go players, remember that hidden behind this simple video game is a network of friends waiting to be made. Who knows? You might encounter the love of your life while catching a Pikachu.