Trending Now
You are at:Home»Features»Opinion»Why Trump will be the next GOP Presidential Canditate

With the primary elections coming up this spring, both sides of the political spectrum are upping the ante to make sure that they take the lead and hit the ground running. For the Republicans, the front runner seems to be quite controversial.

In spite of a number of derogatory statements the latest polls show that Donald Trump, real-estate mogul and TV-personality, is still in the lead for becoming the presidential candidate for the Republican Party.

The poll results might be shocking, but when one looks at how history has had a tendency to repeat itself it might not seem as strange.

After the financial crisis in Europe in the 1930’s the Nazi Party in Germany gained most of its’ momentum. They found a scapegoat to blame for the economical issues the country faced, and the people of Germany had found a party that manifested their discontent with the situation of the time.

The foundation of the United States of America is still quite shaken from the financial crisis in 2008 and the economical situation of many American citizens has created an environment of discontent, and the search for someone to blame for their problems. 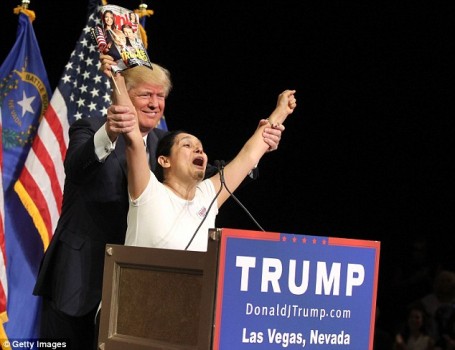 “I’m Hispanic and I vote for Donal Trump” shouted a randomly selected (…) supporter at the Trump rally in Las Vegas.

Donald Trump has become their beacon in the darkness of financial distress, and he is taking as much advantage of the situation as he can.

By blaming immigrants, former politicians, people of different creed, or sexual orientation he provides what a big chunk of the American people wants: A finger pointing at who is at fault.

“Many are right; it’s not about trusting Trump; it’s a collective middle finger to the establishment… Trump isn’t stupid, he gets it. He knows the more outrageous, the better.” – Trump Supporter

Trump leading with thirty two percent, compared to Marco Rubio who has a mere thirteen, or Christie with just over ten, will most likely be the Republican representative in Novembers presidential elections. 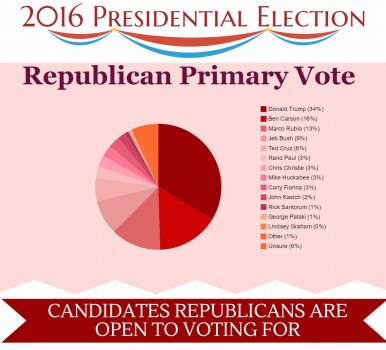